Do not believe this landscape.

It tells lies. Reality, fiction, perspective, traffic laws, all is mixed up together like a sweet potato, asparagus and granola lasagna. It does not blend, the colors are wrong, and it comes back to haunt you in the bathroom. 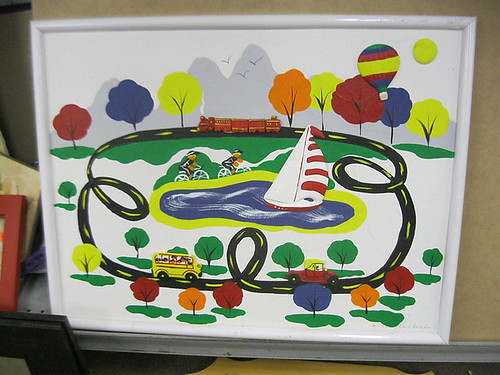 This is kind of the spaghetti intersection version of the Myth of Sisyphus, the one where some guy can’t roll a rock up a hill and everybody calls him a sissy or something. The bus, the car, the train (?) endlessly circling the road…or track…or whatever, only stopping when they hit a bicyclist.

Count the number of transportation methods.

Did you count seven?

You missed the seagulls. 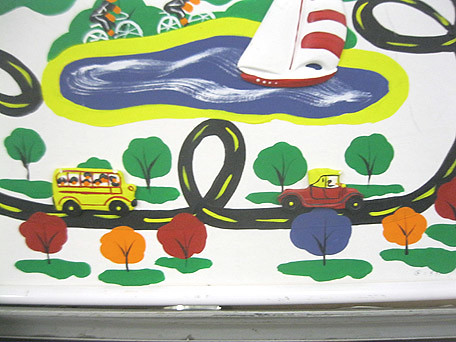 I can imagine that little Beemer could make the dreaded Highway 5 Loop-of-death. Not the schoolbus. Not if Keanu was driving it. Not even if Ms. Frizzle was driving it. But then, why risk it?

Because nobody escapes Highway Five. Eventually everybody tries the loop.

For the record, these are VERY BIG bicyclists. 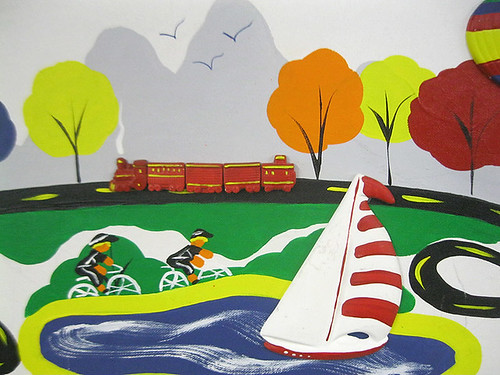 If this image is to be believed, and I do believe, I do–the bicyclists are substantially bigger than a bus. It is likely a short bus (oh, is it a short bus, oh yes). But still, those are some mighty, mighty bikers. Anyone that can stand a lake on its side and drive it is an impressive specimen.

Anyone see that train riding on the right side of the road, in the passing lane? Good, it’s not just me. I worry sometimes.

I hope when that balloon was launched into the air there was a great wet “POP” sound, or this was totally not worth the $3.99.