I’m not feeling it. 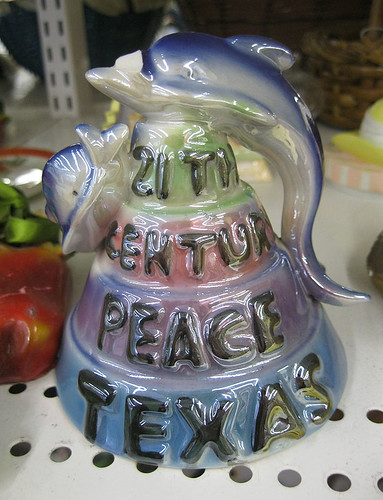 For the record, this says (sic) 21th Century Peace Texas. And it looks like a Babylonian ziggurat covered in dolphins. Really BIG dolphins. Or, a gay rainbow version of Devo’s “Energy Dome” hat. Again, covered with dolphins, but I am not familiar with the full corpus of Devo’s videography, perhaps they had dolphins. They were a big 80s band, after all, and what is the 80s without superfluous dolphins?

And what, for that matter, would the great state of Texas be, without dolphins?

Yes, some of you more astute people would say “it would be Texas,” and there you would be correct. Also, a deep-seated wish for peace in Texas is a wish for frustration and bitter disappointment. Â It would be like a wish for a hipster-free Seattle, or a mysteriously rainboid apple that said “21th Century Calm New York.”

This looks like it was mass-produced, but really, I can’t think why. Even the most die-hard aging hippy in Austin would look at this and say, “…no. There’s just not enough sky-blue hope-rays for this one.”