Ragweed, cedar, mold, and apparently cat dander is sweeping in from the north, south, east, west, and exotic directions like “strange” to create a perfect swarm of allergens, and, really, I kind of feel like this. 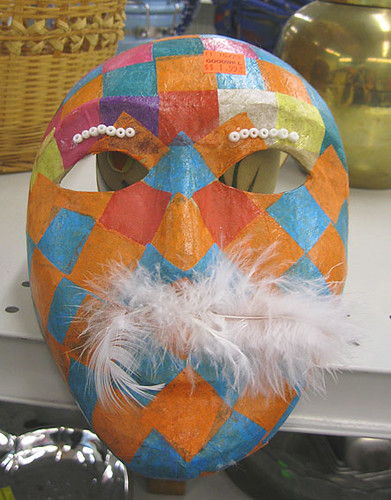 Not so much the part of being covered in brightly colored crepe, but the part of having feathers rammed up one’s nose, yes, that part rings true.

The jury is unsure about the weird white boney ridges over the eye, or their function. It would be awesome if they had toothpicks in them. Sort of a kitchen punk sort of thing.

Here. Have some of the world’s largest beans. 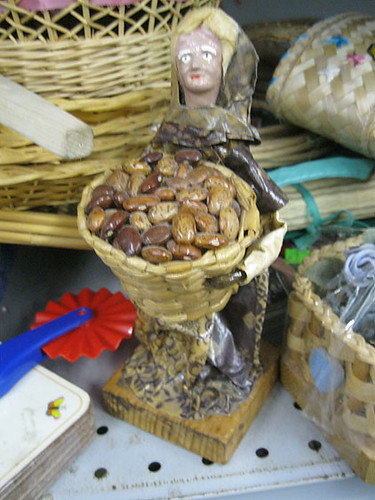 There was a time when these things roamed the shelves of goodwill in mighty herds, eking out a wretched existence in “home goods”, living tiny flipper-like hand to grim, painted mouth.

I don’t know where they went. They were everywhere, now, barely a handful exist in their native habitat. I wonder if the artist just got bored after making 3.4 million of the damn things. Maybe they ran out of inspiration. “Beans…pot…children…old woman with bag…old woman with box…old woman with beans…No, no, NO! It’s all wrong! It’s all…so trite!”

This one, though, has a giant crock of “big as yo face” beans, and I think that’s pretty awesome.