Ironically, I think this cheetah’s wheels aren’t going to help it go any faster. 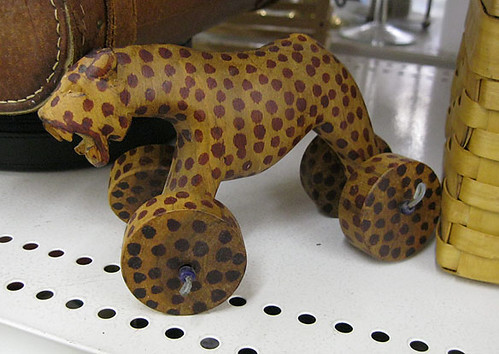 Now, it’s probably not fair to pick on a kid’s wooden toy for being scientifically inaccurate, but we have to draw the line somewhere. Our children’s academic standing is at stake here. Plus, it’s a particularly silly-looking toy. Like some wacky creature out of the deserts of “The Wizard of Oz,” but with a terrible skin condition, speeding through the sands at like 2.3 miles per hour, its feet nailed to hatboxes. Zoom!

Even its wheels are spotted, and somehow that’s where my suspension of disbelief broke. It’s got huge cake-shaped paws. No wonder the poor thing looks upset. 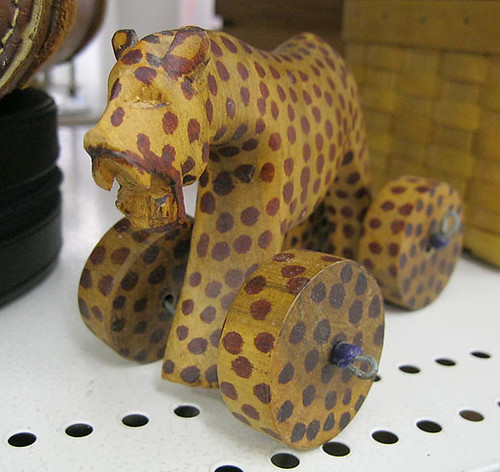 The horrible teeth threw this into the realm of “oh, god” for me. I’m imagining a tribe of spot-cats that just couldn’t catch that damned gazelle, gave up, and started eating cork.

“It’s…*choke, gag* not THAT bad…pass me some barbeque sauce or something, maybe it’d go down better if we had some bread…”

For the record, it’s pretty deficient as a toy, too. It’d really only roll if you held it on a nearly vertical plane, and that wasn’t so much “rolling” as “rapid tumble.”