Excuse me, Mr Hitchcock, but… 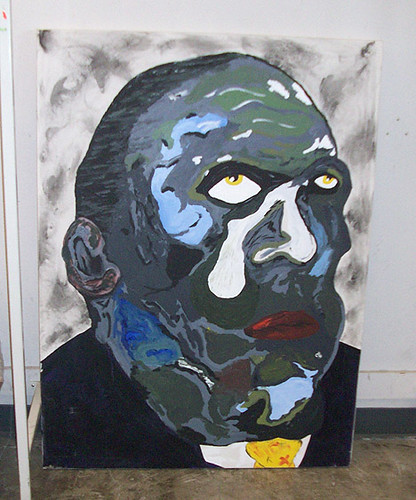 Maybe this is a subtle commentary onÂ The Birds? Like, “Don’t stand underÂ The Birds?”

This might be the preliminary work for a new Shepard Fairey poster, you know, the Obama “HOPE” guy. Except it’s horrible, black and purple and green, like someone rolled the famous film director down hill and he landed, bruised, in a marsh, slowly sank, and became preserved like some British bog-man. Then made a political poster out of him and wrote “GOOD EVENING” underneath in 200-point Gotham Bold. Then he went on to do something all famous and presidential and just tossed, tossed I say, old Hitchcock away, forgetting his roots and getting commercial.

Or someone found a piece of old limestone that looked a bit like a face, gave it a cheap suit and HUGE RED LIPS. And then immortalized it on canvas. Because…it’s high school, and that project is DUE, man. It’sÂ due.

One Response to “Excuse me Mr Hitchcock”