The road goes ever on

This is Jerry’s universe, and I want no part of it.

Sure, it approximates idyllic, you’ve got the road, the tree, mountains, a mathematically precise valley. And this may be a lovely day in Jerryland. But frankly, I’ll take Texas summer, thanks. 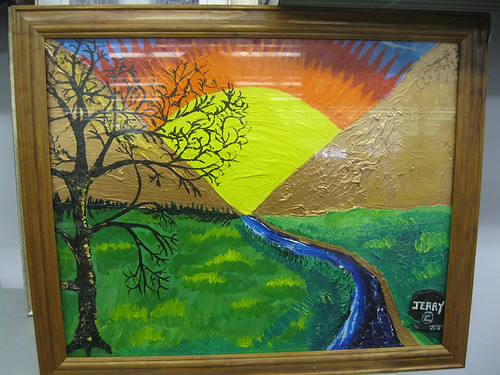 Everything was soÂ nice until the sun went nova. This is the sort of sunrise that indicates something has gone horribly wrong, and it’s probably time to bring in the cat.

Maybe they’ve been living with this for a while now. That’s why the road is so close to the stream that you could fall in, just in case you burst into flame, you’ve got a convenient way to douse yourself. That’s what happened to the tree. They sprout, grow their little green shoots, then…foom.

Besides the sun, the river itself is a bit…funny. Rather than runningÂ through the field, it’s a thick, sluglike blue mass that rolls slowly across the field, a massive, slightly gelatinous worm lying across the greensward like an earthworm on a birthday cake.

Jerry. He paints what he sees, and it’s his birthday.

One Response to “The road goes ever on”