Past the plains of Minas Sarnath, beyond the Gates of Kestra-Doon…

If I knew what this was, I PROMISE I’d tell you. I have a suspicion that it was meant as either a jewelry tray or a way to serve onion rings. There’s a big gap there. But someone spent a lot of time on whatever the hell this is, so I assume they had a good reason.

In the Steven King version of this post, three people would have died when they tripped and fell delivering onion rings on the CURSED TRAY. I suspect the actual curse of the tray (if the onion ring theory is sound) is that it would make the bottom onion ring really cold. Not really Steven King material.

One of the stranger things about this–besides, well, just about everything–is howÂ Â pessimistic it is. “Gee, thanks, dad. Now my onion rings are cold AND depressing. How about you widen the spokes on the hot dog roller so that they fall through next, and then write a little haiku about the futility of life and hot dogs?” 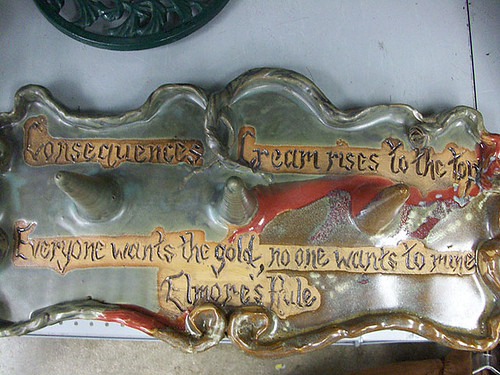 If this was a map of a strange fantasy land (and I haven’t ruled THAT out, either) I don’t want to know why the two mountains run red with blood. It looks like the Eastern mountain’s really the place to have your summer home, much less blood. Although the gods saw fit to write CONSEQUENCES just to the north, which, again, probably something of a downer.

Oh…it’s from Geej. Well, that explains everything.

“Humans are horrible and selfish, just give up. Love and kisses, Dad and Geej.”

If anybody has a better idea than “onion rings” let me know.

One Response to “Past the plains of Minas Sarnath, beyond the Gates of Kestra-Doon…”