Okay, maybe it’s a goose. But let’s not split hairs. The important thing is, it’s a large,Â buoyantÂ waterfowl, and it’s wearing a swim suit. It’s kind of like the trophy for the 2014 Faintly Awkward Olympic games, which will, like last time, be held in London. Last time, and indeed, every time. 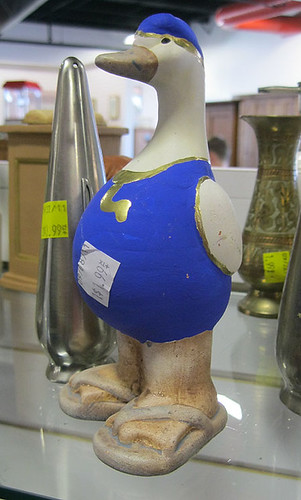 Work it for the camera, baby. The mallard LOVES the camera. Unless, of course, it’s a goose. Again, not ruling that out.

For the record, those are salt shakers on either side of the bird. I don’t know why I feel like saying this, it just seems worth pointing out.

This is one of those DIY paint jobs, which means that someone, somewhere, said “what art project am I working on during family craft night. Gently-rounded, modestly-dressed waterfowl? Don’t mind if I do.” The results…jarringly blue. 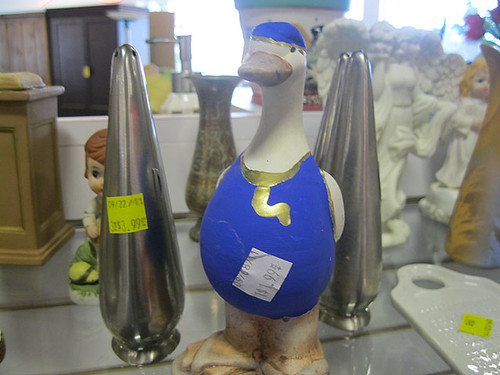 I really think people just don’t treat family art night like the sacred institution it was in the mid-to-late 50’s. Back in my day, if you didn’t paint a rather sad little girl with a bloated head with a bonnet sort of poured over it, you might as well just throw in the tempera paint. 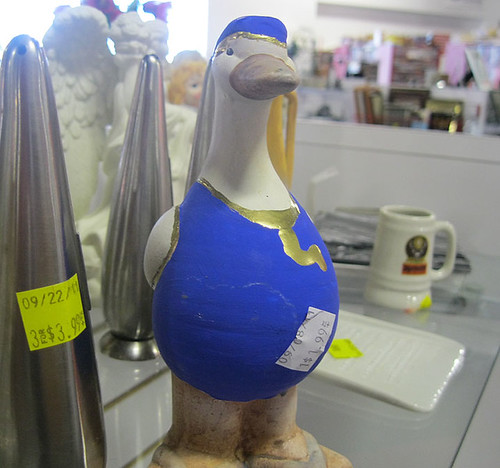 Buy it. Take it home. Put it in your trophy case. See if anybody asks.