Froggy went a’courting. Or maybe he’s just really into industrial architecture and wants to sing about it. 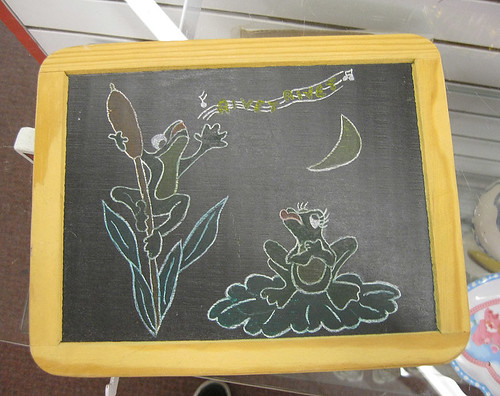 Of everything I’ve ever found in the Goodwill art bin, this may be the most expressive. Look at Mr. Frog–he can barely contain his ardor, pouring his love out onto the night chalkboard and doing an impressive sort of pole dance on a cat tail. He’s into the moment. And his beloved…well, I’ve never seen a frog with such supple lips. Do frogs have lips? I’m pretty sure they don’t, though I’ll allow the eyelashes as a regrettable consequence of artistic license, and just be thankful that Mr. Froggy doesn’t have chest hair. I would have to step away from the thrift store, if he had a 70’s style wooly chest. That would be too much.

Now…perhaps this is a foreign language frog, who speaks a different dialect of frog, like the way dogs in Spain say “guau, guau,” and in Korean “mung, mung,” and in German “Ich verlange, dass Sie aufhÃ¶ren und verlassen die RÃ¤umlichkeiten!” Perhaps froggies do say “rivet, rivet.” 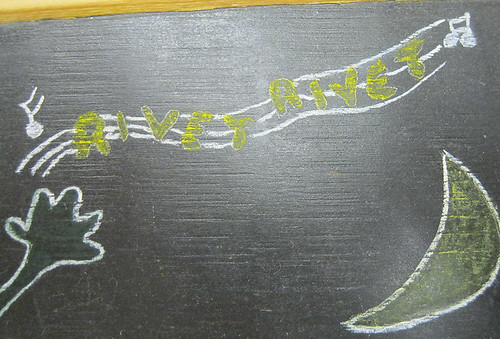 But I think froggie’s got a song in his heart, and that song is industrial fasteners.