“No…no, that can’t be right. The angel was very clear, he said I was going to give birth to child, the king of the house of Jacob, ruler of the earth, son of the Most High, and in some translations, savior of mankind. This is a rabbit.”

“No, no, you’re right, it’s absolutely rabbit. But the angel didn’t say he WASN’T going to be a rabbit right?”

“Joseph, I’m having a very bad morning, there’s all this company, and you’re being very flippant about the rabbit.”

“To be fair, my last wife also used the ‘no, no, it’s the LORD’S child’ line on me, and the lord turned out to be Chavivi, the cooper next door. I’m actually feeling pretty good about this.” 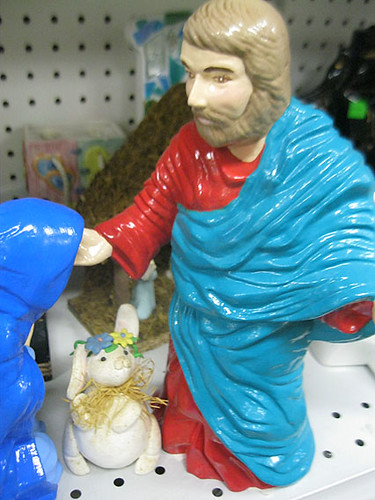 “I actually think he has your eyes. Or are those poppy seeds?” 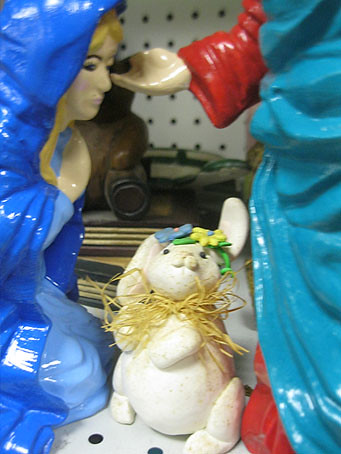 It was one of those freak horror movie type accidents, like that scene in the Twilight Zone movie where there was a REAL explosion and the helicopter’s crash was…unusually authentic…and there were a few substitutions in the actor line-up for the rest of that scene. The angels came into the barn to fly around the roof and sing their assortedÂ hallelujahs, Mary stood up too suddenly, and…oh dear. It’s okay, we can just say the rest of Mary’s appearances were “the OTHER Mary. The theologians won’t even notice.” 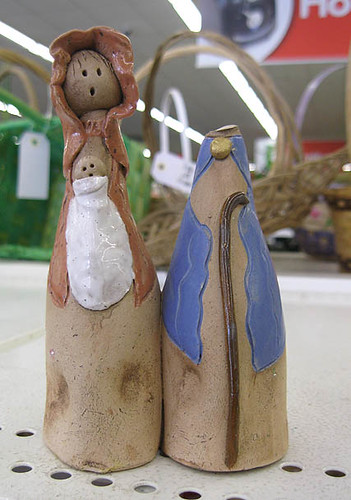 Throw this last one in the category of “I’m not sure why I took this picture, but dammit, I’m going to post it.” This is what the tree looked like just before it blew over. 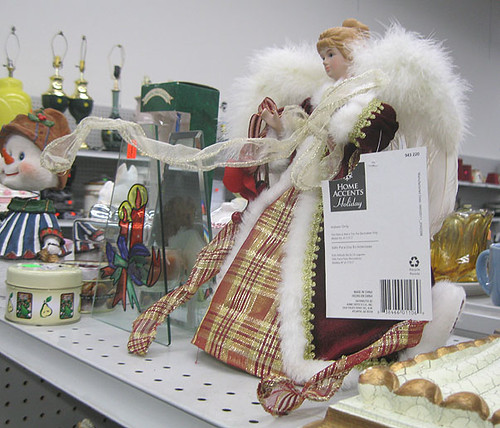 Definitely funnier in my head. And now you have to suffer.Â Happy holiday of your choice!

Bunny nativity from Goodwill near Anderson Mill, Mary Lost Her Head from Savers on South Lamar, somewhat missable windswept angel from Goodwill on 2222 and Lamar, Austin