It’s been a while since I felt a rush of danger in the toy section. I’m glad to get that resolved, the thrift scene just hasn’t been as adrenaline-filled since the Goodwill on 2222 moved the glassware away from sporting goods section.

This is what happens when they make a Saturday morning cartoon based on the movie, “Saw.” 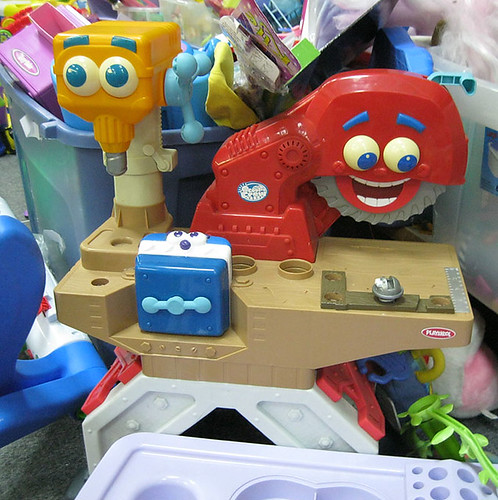 Good lord. That face. That…beard? This is an instrument that’s clearly very into its concept. “I saw. I saw well. Here, let me demonstrate on your exposed flesh.”

The drill press looks away. The drill press knows a thing or two about atrocities, and would prefer to keep a low profile. The clamp, witness to more horrors in its young life than it had hitherto thought possible, and has been forcibly silenced. Both are mere accessories to the devilish delight of the saw itself, the creature gnashing its teeth and straining at its bindings, eagerly waiting to put a final end to Barbie and Ken’s on-again, off-again relationship. How the small plastic heads will roll!

Well, at any rate, it clearly enjoys its work.

Regrettably defunct St Vincent De Paul’s near 620 and I35, Round Rock