Wherein I try to shake the cobwebs off of stuff I don’t exactly remember why I photographed, it seemed REALLY funny at the time, but now it’s funny like whatever it is the fridge smells like, “I think that chicken is a little…funny…”

I don’t know which member of this  “dynamic duo” is the brains and which one is the muscle. It looks like the squirrel’s the only one with any cognition going on, but even he’s lost in the perfect contentment of the world’s biggest acorn. The angel…she’s probably thinking of a really good hamburger. 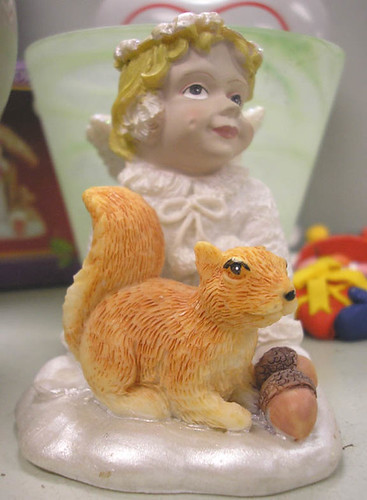 “If you so much as touch this acorn I will absolutely trash your investment portfolio.”

I really thought I had a great story worked up around the Seven Indolent Dwarfs, but now…no, it’s not coming to me. They just continue to raise questions. Why has one dwarf accessorized his lipgloss and pants? Who’s he trying to impress, Snow White? I don’t know. Dwarf Six in the sherbert/saffron hat seems to be checking out Dwarf Four’s goods, and not unappreciatively. But Yellowhat seems to be crawling drunkenly toward the toilet, and while “drunk” is not a bad way to start the evening, “in a pool of one’s vomit” just doesn’t sing.

The only one that’s actually DOING anything is the fellow in the burgundy tightpants, but his expression suggests that the only thing he, and the other dwarves as well, were doing is several dime bags of Hawaiian Big Bud.

I weep for Snow White. Rehabilitating these guys is going to take more than a musical number.

And the only remotely funny thing about this one is that it looks like the coyote’s caught some rare mint-pistachio virus. Is there any piece of furniture or wall hanging this sculpture’s intended to compliment? We’re in deep “motel sofa” territory here, the land of the interior fashion “don’ts.” 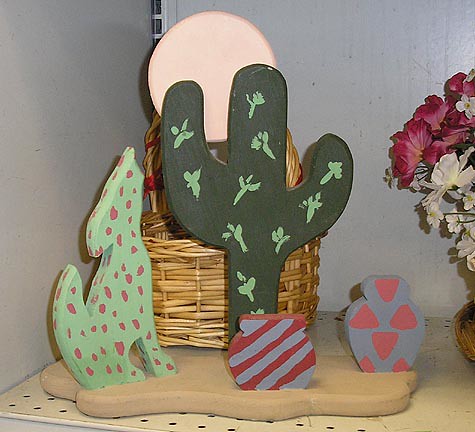 Thank you for your patience. I make no promises about Monday, except I probably won’t use these exact images.

All from Goodwill on Metric and 183; Angel and squirrel back in 2007; dwarves from November 2006, coyote from July 2006. Clearly these were funnier in my head.