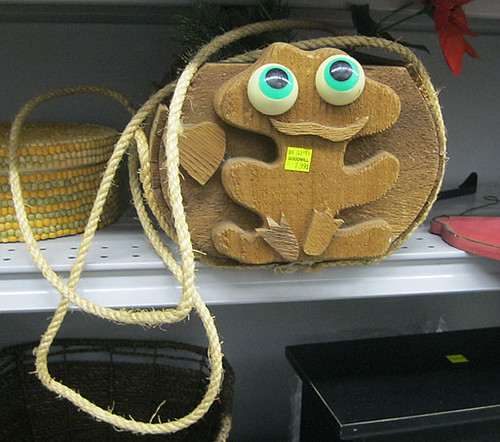 Those are some strange flippers. Feet. Whichever. Sitting there, Buddha-style, there’s a certain serene zen no-mindness to this frog. Like you get sometimes with cocker spaniels, and ardent fans of late 80’s-early 90’s series “Full House.” Â A frog that’s so totally at peace with itself that its consciousness has not just expanded, but is in fact shopping a few aisles over in hats, belts, and shoes. 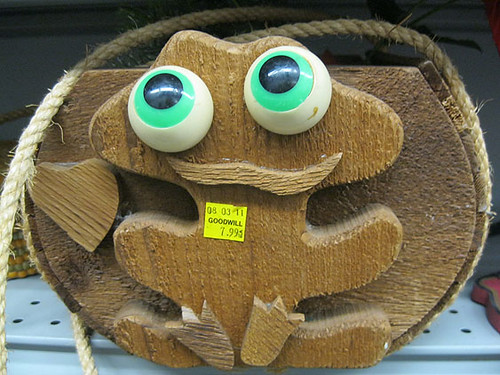 And yet, don’t think that this frog is just a useless ornament, a wall hanging or goggle-eyed house guardian. No, it’s a working frog, with a heavy load to bear. This frog is carrying Christmas. Or at least a really fakeÂ poinsettia. 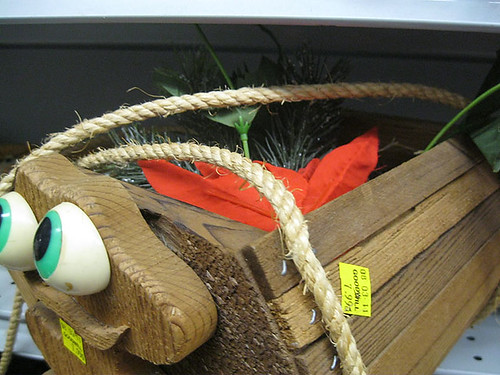 It’s the Frog of Christmas About Four Years Past, with a poinsettia which, despite being made of cloth and bits of plastic, is losing its leaves. It’s the poinsettia of the Long, Long Fall. But this frog is cheerfully, selflessly letting this ancient dead pseudoflower bloom again, kind of, go for one last holiday “Hurrah!” around Housewares before sinking into the sedimentary and glass shard-infested Â compressed layer of the Goodwill Outlet Christmas bin. Poor frog.