The 80’s throwed up a little

The Sally on 1325 in Round Rock had a fit of unusuallyÂ striking artwork. Striking in the same sense as that 18-wheelerÂ barrelingÂ down on you is striking. Striking like the explosion inÂ The FifthÂ ElementÂ where Bruce flies halfway across a space hotel. The Salvation Army, clearly, likes their artwork loud and proud. So duck, here comes the daisies! 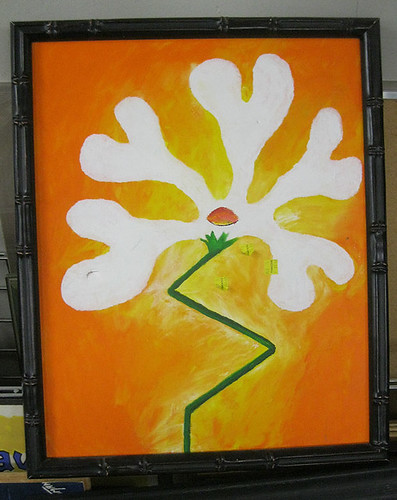 Owing to a quirk of forced perspective, I’m left wondering if that’s a stem, or the narrow path to a flower-themed amusement park, or maybe a madcap celebration of a single slice of fried bologna surrounded by spectral hearts. The pricetags look like little lean-toos bathing in the majesty of this one amazing, incandescent flower. Do they shield theirÂ inhabitantsÂ from its glory, or provide them some small amount of modesty as they soak, naked, in its radiance?

Oh, to join them. 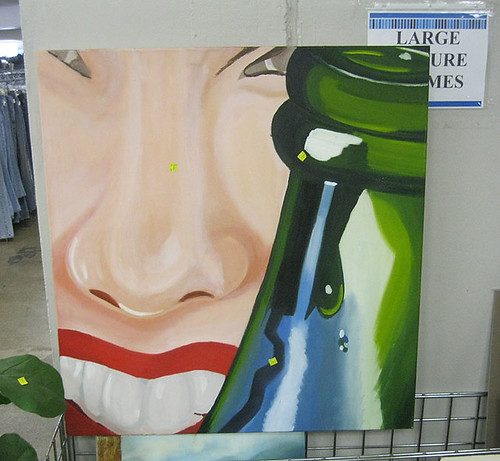 The question answers itself, I think. Who let the Joker designÂ Perrier’s publicity campaign? And what is that leering imp? Its lips and nose are human, to stretch the definition a bit, but its eyes are the slit pupils of a cat. A cat who, clearly, likes herself some fizzy drink, and…well, I can’t tell. She’s either happy to share it, or is baring her teeth in a threat display. The jury is still out.

I hope these are both by the same artist. Because I want to track them down and, forcibly but compassionately, adjust their saturation.