Probably a metaphor or something 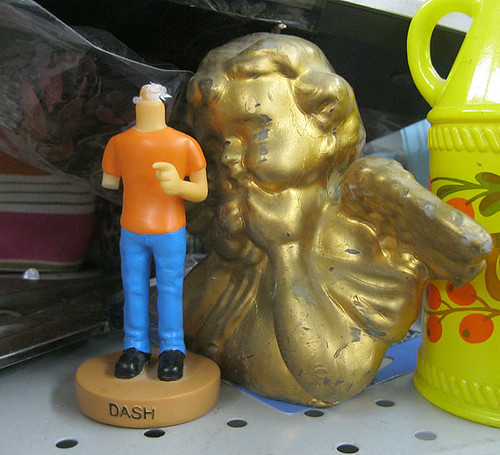 I don’t know what we can take away from this except that the heavens smile upon your misfortune.

I followed the saga of Dash for several weeks. Originally, as I recall, he had both arms. But he never had a head. I don’t know if this was intentional, maybe Dash was made without a head as a misguided statement for the rights of the acerebral and caputaplegic. Or a subtle irony. Dash: Stationary, without an organ of agency. Do you know Dash? Perhaps everybody knows a Dash. Perhaps everybody IS Dash, but then nobody would have heads, and you’d be, like, stumbling over heads and stuff.

But some time after he lost his arm–week three of the Dash saga, I recall–he wound up in this meditative moment on the brick-a-brack shelf. The heavens take pause to stare, lovingly, at our troubles. Thank you, Angel. Thank you, Dash. But you probably didn’t hear me.