I’ve heard rumors that eating fruit every day is, allegedly, healthy. I’m not sure if that applies to all fruit. Particularly to this guy, who appears to have fallen from the pastry tree. Perhaps he’s some exotic muffin fruit. But I think he might have landed on his head. It shows. 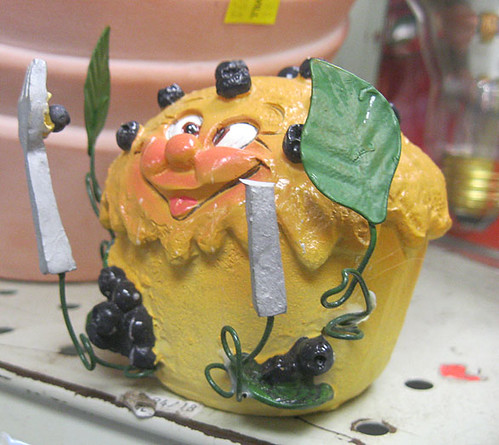 No sane creature should be happy about being eaten. Certainly not THIS happy. That sort of flashing, mad happy that you only see right before “Black Thursday” shopping season opens, or at a model railroad enthusiast club. Good lord, the thing’s got a fork and a knife for you. He’s even preparing the garnish.

Is it a fruit? I think it might be a fruit. I’ve never seen a muffin growing on a vine before, which, clearly, is what we’re up against. An emotionally disturbed, manic vinemuffin that wants nothing, nothing so much as to force itself down your throat, your own thoughts and opinions on the matter be damned. Eat the muffin.

But never, never, eat the durian. 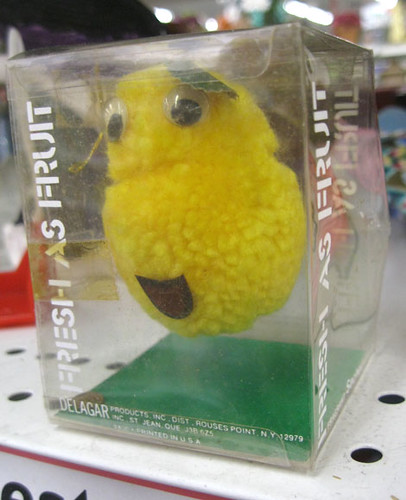 Even if it looks absolutely thrilled to see you, happier than an attention-starved Jack Russell terrier let loose in a preschool, don’t eat the durian. It’s sealed in that transparent box for a reason. “Fresh as fruit” is a MEANINGLESS slogan so long as the fruit world contains durian. That is a grin that lies, a crocodile smirk. Leave it in its box.

Enigmatic leafy muffin from the Salvation Army on 1325 near Round Rock; safely-boxed durian from Savers on South Lamar, Austin.