This person dreamed big. Most people are content to dash off a blodgy picture of a sad clown, or a creepy-but-slapdash kid’s face, or maybe a landscape where the sky and trees and earth run together into a sort of “painter’s floor” impressionistic mess. Not this artist. No, they went for the whole dang world, PLUS strange cosmic gods. And on such a scale! The canvas itself was well over a yard tall, yet the level of detail was just slightly better than if Mario’s grandma embroidered him an 8-bit “Home is wear you keep your Coins” sampler.Â  Yes, friends, if a fish took up fingerpainting and had, to be fair, a sense of world geography and mythology well beyond most fish, you might just get…this. 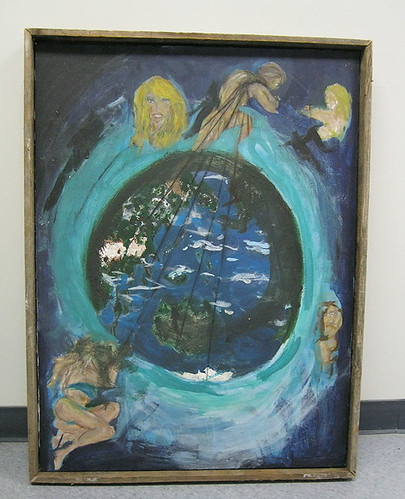 My hope is that this is just one piece out of a 20-painting “Major Arcana” set, but that wouldn’t fit in most houses even if it was off the wall. There’s so much going on here, I’m not sure where to start. Sysiphus towing the world to the mechanics? The entangled twins? Barbie? 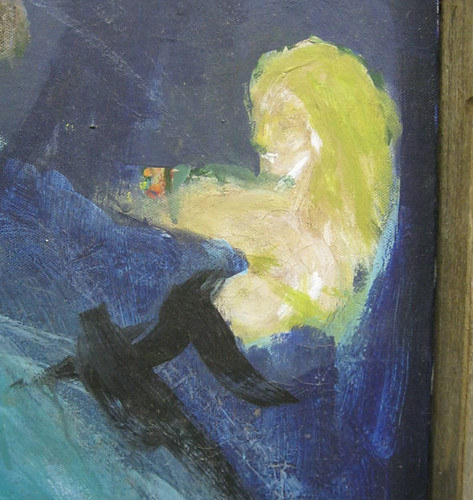 How about the angry woman slowly and painfully transforming into the Japanese Kanji for “Sun?” At least I think she’s an angry woman. She may be an angry blond pro-wrestler. Or He-Man. Regardless, s/he looks pissed. I would not want to be turning into Kanji. 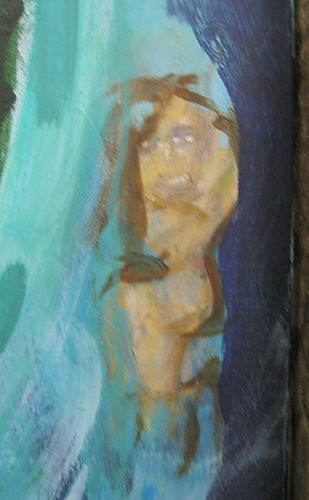 I would also not want to be a horrible bug-woman being swept away by a tsunami. Or, more broadly, a bug-woman of any sort. Why doesn’t anyone on this picture look happy? Or even vaguely human? 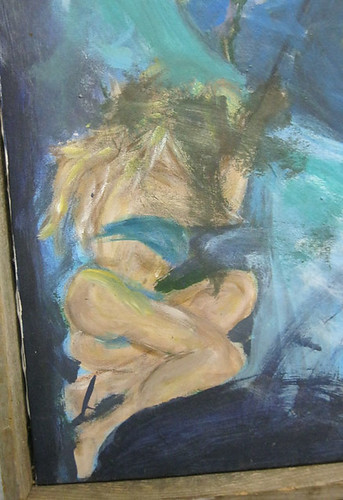 How many people are in this detail shot? Count the feet and divide by four…one and a half, I guess. I think the basic idea is “lovers in bondage to the world,” but they’re one indecipherable blur of limbs sharing a single mane of tragically-unconditioned hair, and possibly a single piece of thong swimwear. 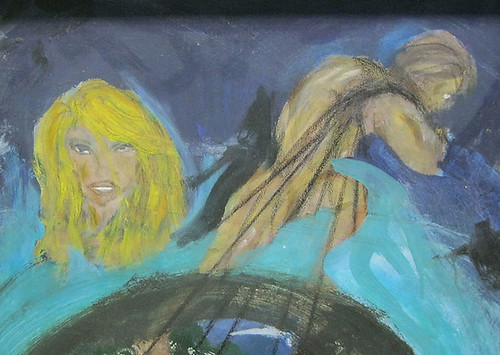 Haunted by his sins against the gods as represented by Barbie, or possibly Tina Turner, or possibly just haunted by Tina Turner, Sysiphus is forced to drag the world around by strings tied to the edges. This is a tricky bit of physics as he’s also standing on the world at the same time, but if you accept that you can tie strings to its corner bits, well, maybe that’s okay. Or maybe this is the root cause for continental drift–titans and 80’s glam.

What to make of this? The general motif speaks of the seasons, or the four winds, or something along those lines, But I don’t see how the four seasons would be “floating blond head,” “anatomically confused couple,” “blue tidal wave lady” and “Kanji-Woman.” Of course, in Texas we don’t actually have seasons, maybe certain primitive tribes believed the Fall was a Diva singer. It just all seems a bit abstract, somehow.

Goodwill in Cedar Park off 183…which I think is closed now?

One Response to “It’s a murky world”