When I was a wee little kid my mother bought me a book called “Amy’s Eyes,” wherein we learn the secret of bringing a toy to life, and also, why you shouldn’t have removable eyes. Little books that are filled with nursery magic might give you a fleeting wish that such a thing might be possible…that a beloved stuffed animal might come to life, nose wiggling and chock full of affection, or Raggedy Ann might actually do all that weird stuff the book said she does.

Really, though, you want to keep all that nursery magic shit far, far away from the Savers on North Loop and Burnet, because you don’t want to see this horrible thing shuffling toward you croaking “You made me reeeeeeeeeal…” 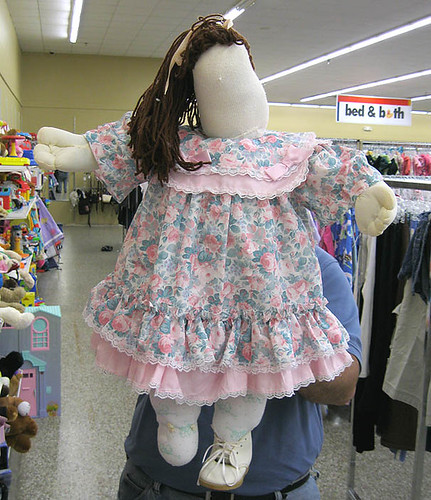 If it even COULD say anything, accusatory or no. Overall the look is “anthropomorphic slug with a cheap wig,” which doesn’t personally speak to me. If it did, I would run far, far away, and not go back to Savers until they’d called in a professional doll exterminator. Or maybe they could get an exorcist from Salvation Army.

It’s like if you let Poppin’ Fresh‘s sister rise for a few hours. Her other shoe’s probably wherever her foot landed. 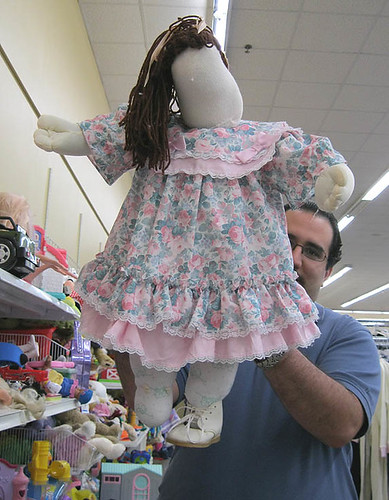 As advertised, Savers on Burnet. And here’s a rare glimpse of Thrifthorror’s executive producer. We are lucky to have such obliging friends.