Probably a metaphor of some sort.

One of the great constants at Goodwill is “weird liquids in bottles.” In many cases, these give the illusion of edibility–peppers, bits of corn, berries, carrots are a prime offender; these once-healthy vegetables die a death of a thousand embarrassments as they slowly meld–I wrote mold at first, which is also accurate–into the viscous medium that is their fate. It is, on pain of food poisoning, worth reading the label on the back of these, “not for consumption.” You might miss that, since they say “gourmet” on the front. Life is filled with these little contradictions.

I’m hoping that this isn’t a kitchen product. Because it’s got bugs in it. 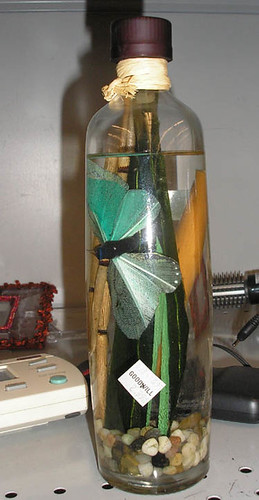 Second guess, probably an oil lamp. Assuming this thing has any sort of functionality at all, which may be a bit of a stretch. And as an oil lamp, my hat off to the artist, who’s clearly a very clever person. I would personally have glued the moth to the outside of the bottle, so that it would sit, transfixed, by the light that attracts it. The artist moved far beyond such trite gluings, drowning the moth in lamp oil. In a sense, the moth is forever kept apart from its fiery end, which is a kind of mixed cruelty. In another sense, as the moth, like all things sealed in oil do, slowly starts to melt into an undifferentiated murky sludge, he gloriously becomes the flame.

2 Responses to “Probably a metaphor of some sort.”