For the elf in your life. That you hate.

Because, frankly, elves are pretty hateable. Perfect hair, perfect skin, don’t age a day until 350 and then “go west,” which I believe would be San Francisco. So if you have an elf in your life, whom, by extension, you hate, buy them this. Tell them it’s the newest fashion in shoes. 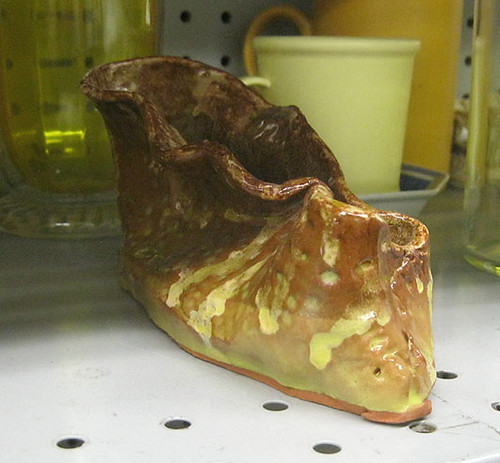 Sadly, there’s only one. My theory is that someone tried the other one on, and it stuck. They probably had to pull out the Shoehorn of Life to pry him out. If he ever came out. Maybe you’ll here him late at night in Goodwill…step…CLACK…step…CLACK…

I could be stretching a bit on the “Elf shoe” thing. But there’s a resemblance. If you made a shoe, presumably for an elf, out of clay…and he tried to take it off when it was still drying…and you covered it with a sort of lemon curd-based glaze…and you tried to sew it back together with a Frankenstein-crude running stitch…you’d get this. And you’d probably get rid of it, but a nice person would just throw the darn thing away rather than wasting Goodwill’s time on it. Basically, you’re kind of a jerk. And here’s you’re shoe. 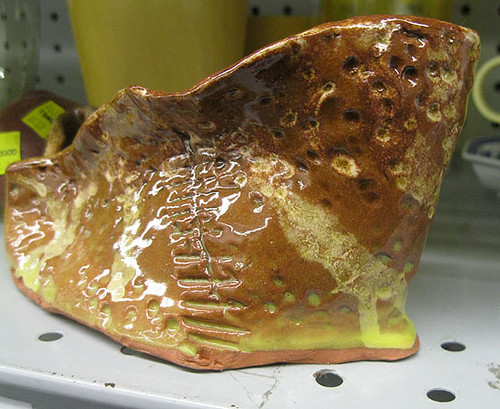 Or possibly, the prow of a majestic leather ship, sewn together after its fateful encounter with a urineberg on the great Privy Sea. The terrible sound was unforgettable. The smell? Slightly worse. 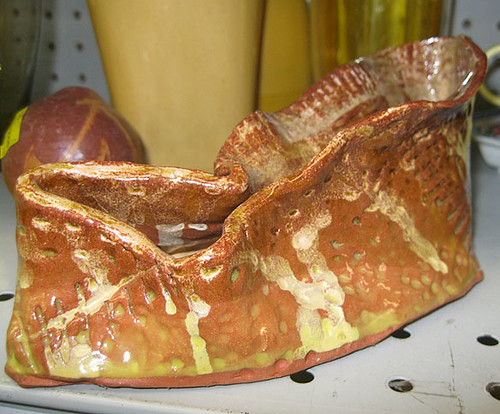 Don’t jump up and down next to the kiln. Sad things happen. This once-proud candy dish dreamt of glory, of Werthers originals. Now? It might be good for bacon grease.

Actually, it’d be great for bacon grease. You could make a pork-scented lamp out of it. I wish I’d thought of that earlier. Before someone bought the silly thing. 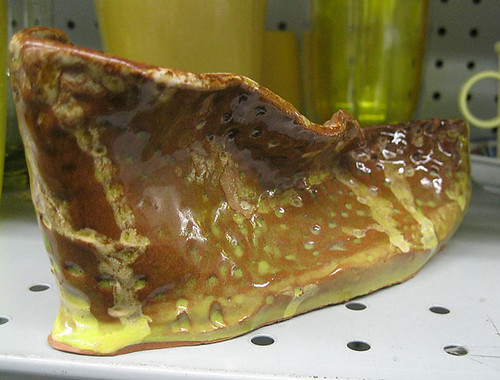 Cheese: Not a valid construction material. Never build with cheese. We told the French navy this, but did they listen? Non. 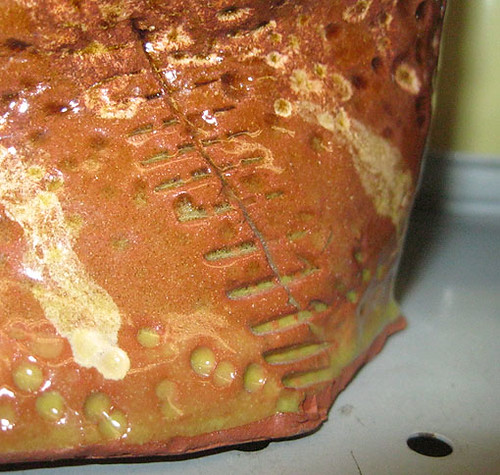 I was actually saving this guy for my 4/20 annual “pots” post, but I hiatused right past it. Mea culpa. But we’re back, and we apologize for our grand return.