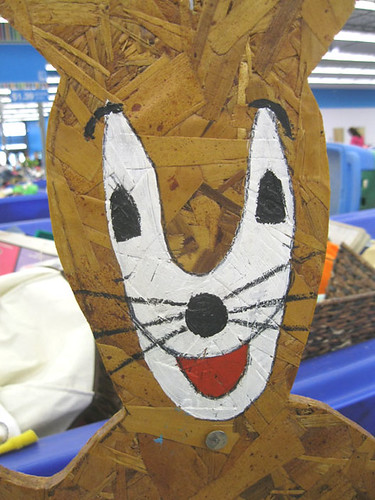 And I would give it to him. Absolutely, in a heartbeat, if it would keep him as far away from me as possible.

The Goodwill “Blue Hanger” outlet store actually isn’t my favorite haunt, because honestly, “broken” isn’t the same as “funny,” and anything that isn’t soft and pliable isn’t going to survive long in the customer-ravaged binyard that is the Hanger. So I set my sights low, and were they ever exceeded by…this guy. 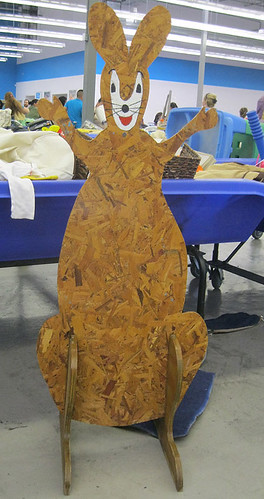 The only other critter I know with arms like that is a Tyrannosaurus, and frankly, I’d rather hug the giant lizard. I’m more comfortable with a known evil. Not this weirdly-proportioned monstrosity. It’s like a blasphemous hybrid of rabbit, street mime, and Butterball frozen turkey. At least it’s probably quiet.

Actually, that’s not at all comforting, I’d really rather know where it is. And what it wants. 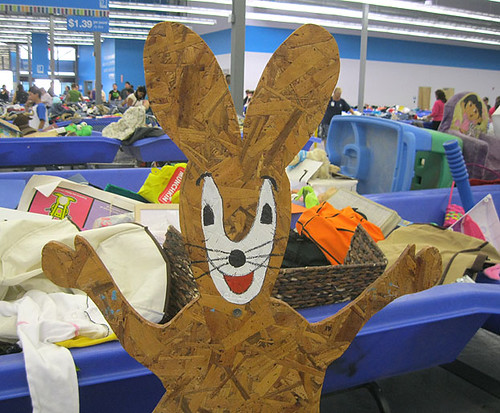 For the record: Devilbunny is held together with pain. There are screws in his head and neck. Do there need to be screws in his head and neck? No. He’s plywood. They’re just there to tear flesh. Every part of him that isn’t a screw is covered with splinters. It’s like an affectionate saguaro. And the worst part is, he doesn’t even have a basket of Easter treats. No, he’s come for yours. And you better give him some. Or just throw him the neighbor’s three-year-old and run, run as if your life depended on it, which it might.