The world in a shoe 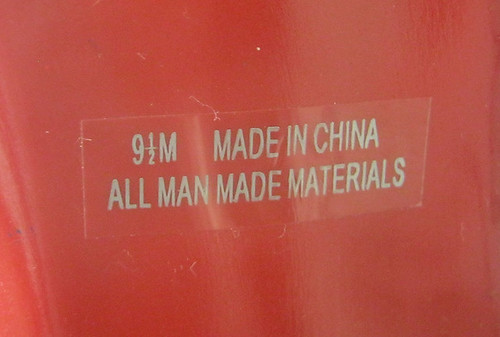 There is nothing in this that surprises. I sincerely doubt that nature would have ever coughed up these materials…but it wishes it had. 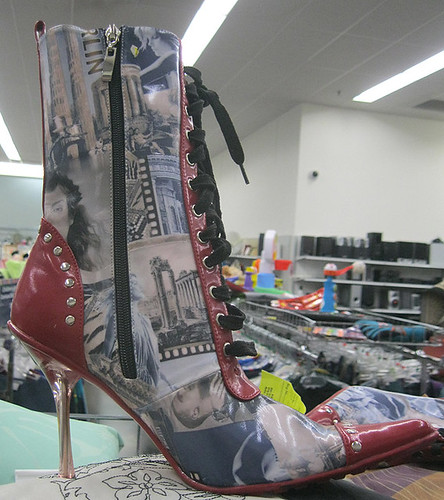 I think it’s pretty obvious that these are the most awesome shoes in the world. When Pope Benedict slips on a pair of red brogans, he’s wishing he had these shoes. They’re just that amazing. And they would really show off his calves. If popes have calves, it’s hard to tell under the robes, but even popes have to go out dancing every once in a while. And when they do, why not trip the rite fantastic in sharp-toed lace-ups with a three-inch transparent heel? Eat your heart out, XVI. 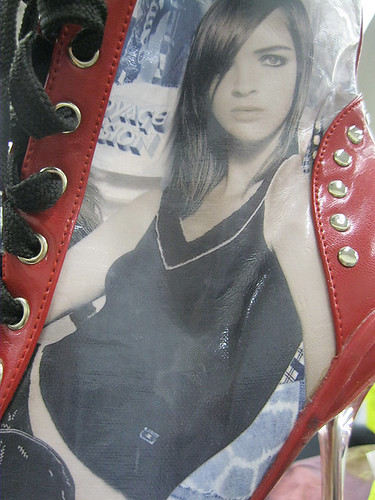 Go ahead…walk all over me. To hell with it. 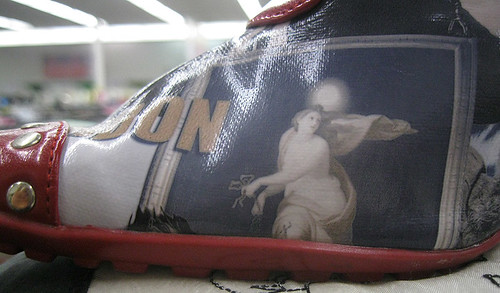 I’d be a little worried about shoes with wispy, vaguely shocked zaftigs on them. But frankly, it’s not the worst crime committed by cobblers. Certainly not tonight. With the full moon in the background, it’s like she’s fleeing a werewolf, or maybe Zeus. All on your shoe. How should one feel about that? I felt a bit like a party to the crime. Not that I wore these, mind, they’re about two sizes too snug. Oh, but in my dreams… 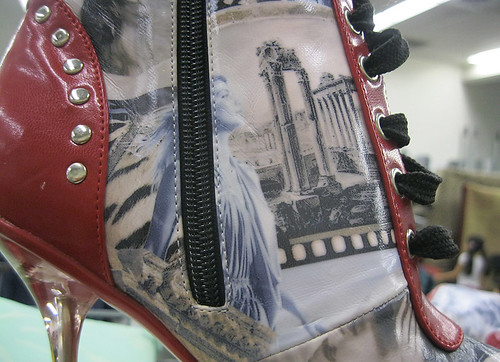 So…I really love this shot. The sense of motion, antiquity, and shoeness is so compelling I want to unzip her to see if she escapes her bound universe and runs free, her life unbound by shoes, barefoot through a field of daffodils and scraps of sonnets on curled parchment. Run free, nymph of the mid heel.

But don’t think that life in these shoes is all Romanesque beauties and midnight dalliances. These shoes are fraught with danger, too. Like a Harryhausen film, they may contain beautiful women and Greek ruins, but they also hold stop-motion plesiosaurs. 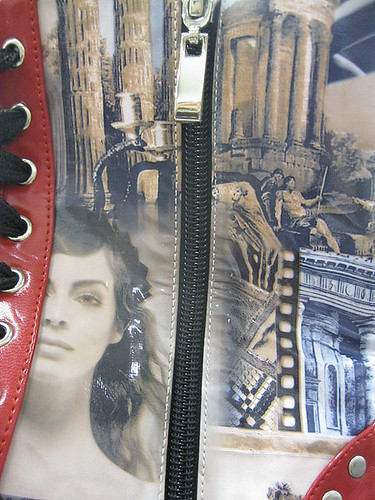 There’s really a lot going on here. But basically, if you wanted a pair of stilettos that presented a reasonably accurate history of the Roman empire and allegorically portrayed the collapse of civilization following the ascent to the throne of Constantine and the assumption of Christianity as a state religion, there you go.

Goodwill on I35 near Parmer, Austin

One Response to “The world in a shoe”