The darker side of yarn

[Note: This was originally a guest post for Rewind Knits and Crochet. It’s been a few months so I’m posting a backdated version.]

When I heard that I was being nominated as this year’s Miss August, I was thrilled. I ran to my computer, updated all my statuses–wait, wrong post.

When I heard that ThriftHorror had a chance to share the strange and eerie world of Austin’s used yarn underworld with the fine people at Rewind Knits and Crochet, I thought, “My god. Are they that desperate? I have to help these poor souls.” So, Brandy, Mary, here you are. You’re welcome. Or, I’m sorry. One of those.

Let’s get right to the clowns, which really is our lifeblood down at Thrifthorror. There was a timeâ€”just after complex invertebrate life emerged from the primal sludge, but before the lion tamer actâ€”when giant, tentacular clowns roamed the bottoms of the ocean, cracking open clams with their sucker-covered limbs and clustering inside comedically small discarded shells, coming out only to feed or, regrettably, mate. And gentlemen, here is the proof. 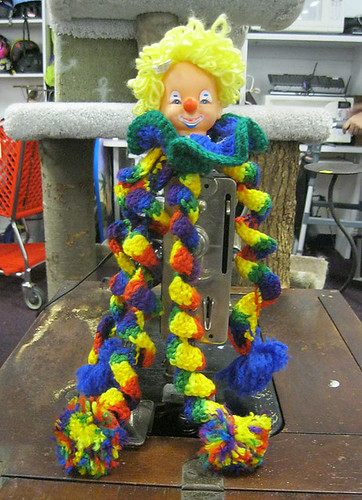 True storyâ€”the stumpy land-fish worked up the courage to get the hell out of the sea because they were utterly creeped out by these things. It takes a lot to really bother a fish, but drifting, doll-headed octoclowns the color of an epileptic fit are a good way to begin. 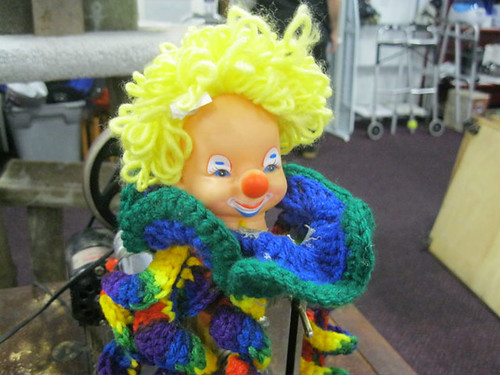 A startling reproduction of an entirely regrettable geological epoch. My favorite part is its beak.

From toys to scare your cat to projects Grandma unwisely began and wisely stopped. Have some wild, wild mushrooms. 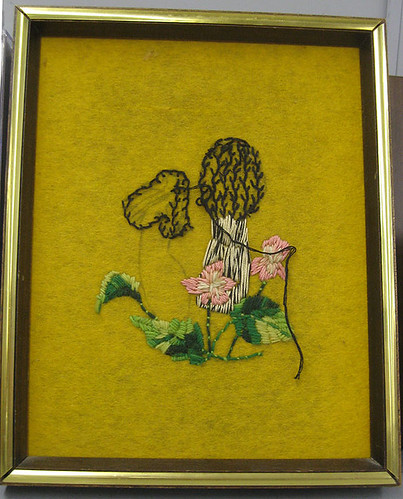 I think the one on the left is a loose morel.

Anyway, the best part of this particular piece of embroidered embarrassment is you can actually see the exact moment when the artist figured out where this project was going to end. Then everything got a little bit unwindey. 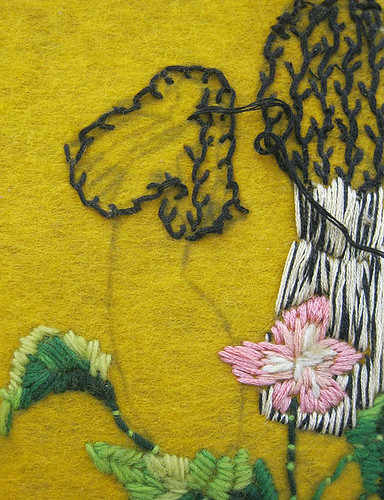 I’m pretty sure I’ve seen this picture a couple dozen times on dishes that escaped from the Seventies, maybe a few Audobon prints. And you know what? It looked pretty darn phallic there, too. Not the sort of image that mere needlepoint would be able to salvage. The little twizzle of embroidery floss flying away like an obscene party streamer, nice touch. But I really like the delicate shading the artist sketched in right before giving up. You can tell, after this point, it’s really only going to go downhill.

The image could only have been improved with a pair of well-placed puffballs.

Sticking with the “unfortunate nature” theme, you really can’t go wrong with a big honking macrame frog. Unless, of course, you can, and I’ve been lied too all these years. You be the judge. 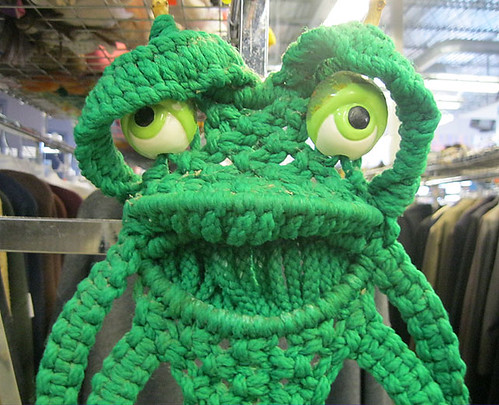 Remember, someone almost certainly hung this up in a house. Probably the guest bathroom, nobody goes in there, but possibly in the children’s playroom, where they will not only develop a deep fear of frogs, but of all aquatic life, which will serve them well as they grow into upstanding young hydrophobes. I can’t imagine what emotions this frog is trying to express. It’s like he’s trying to file his small business taxes. 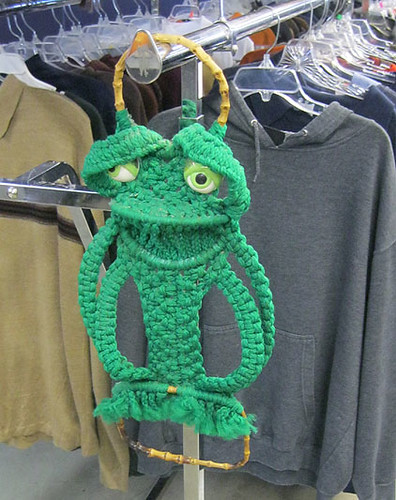 Our executive producer, Dr. Chance, says this thing bears a striking resemblance to the monster “Lungfish on “Psychonauts.” I think I disagree. The overall look is more “roadkill.” I should have bought this for the office’s Christmas partyâ€”can you get a penalty for rough play in a white elephant party?

This post seems to be going into triple overtime, so I’ll wrap up with this sweet little piece of handicraft from the “don’t do that with wool” file. 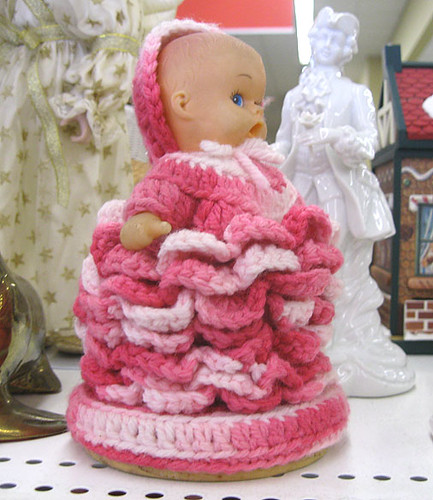 Martha Stewart has nothing, nothing at all to say about this piece. It is clearly a bad thing. Each lovingly scalloped ruffle and pleat is a hand-crafted coaster. It only looks like bacon. Unfortunately, that means that when you have a party of six or eight heavy drinkers, you’re left with this. 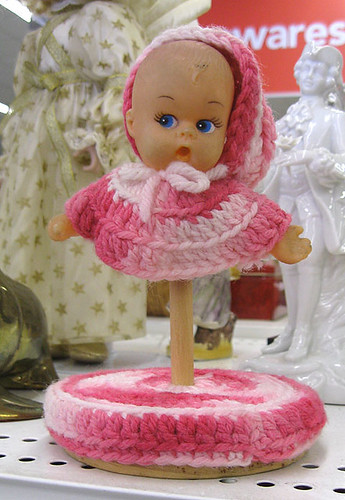 Which after a few beers, is actually kind of funny. Except for its sad, stumpy little arms and pencil-thin body, and one massive, circular foot. That’s just sad. Baby, pull down your hood. Hide your shame. 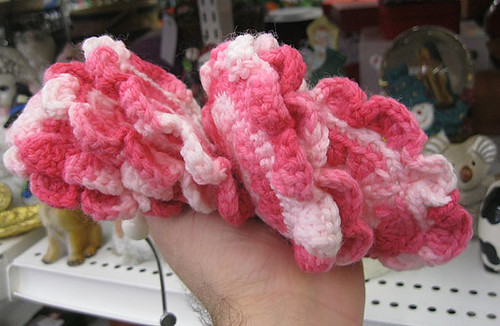 Fist full of baby! Soft, organic folds of knit muscular tissue rammed on a stick and topped with a cheap doll head. It’s really the little things that matter in life.

Thank you for the kind invitation, Brandy and Mary. Let me know when you’re passing through Austin and we’ll go shopping!