Hateful Santa Emptying his Sack of Christmas, and his other creepy friends

“Kid, I have been doing this for, like, 1900 years. Frankly, I don’t care if you’ve been naughty, or nice, or if Livejournal shut down your page because of their new obscenity laws. I’m dumping this crap here, and you’re going to get it. Whatever the hell it is, you better hope it’s one size fits all and unisex.” 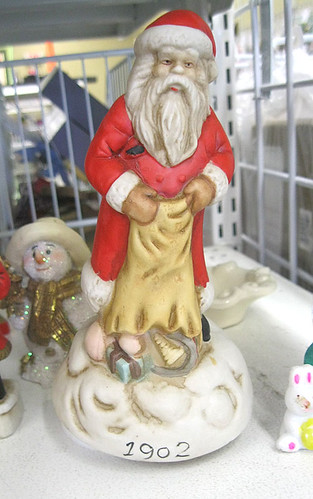 “You wanted a conch, right? What kid doesn’t want a conch. The elves…the damned elves made 740,000 conchs this year, so you’re getting one. Oh, and a ‘betsy-no-face,’ very popular doll in 1893. Wouldn’t want to have any nonconformity, right? There’s your doll. Don’t bother opening the box, it’s empty, just wanted to have something there with some sparkle on it. Now, unless you have the REST of this sherry, get the hell upstairs and think about sugarplums or whatever.” 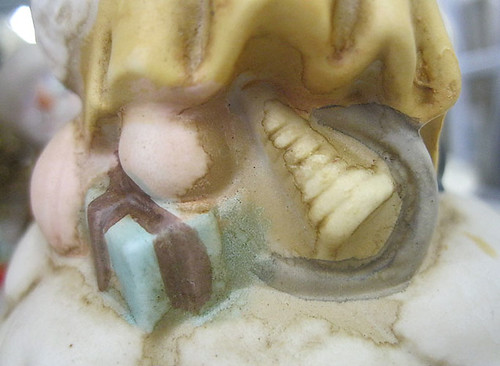 Sometimes, sometimes Christmas makes people do some crazy things. Particularly elves. “Don’t come any closer, Santa! Don’t do it, or I will fucking CUT this doll!” 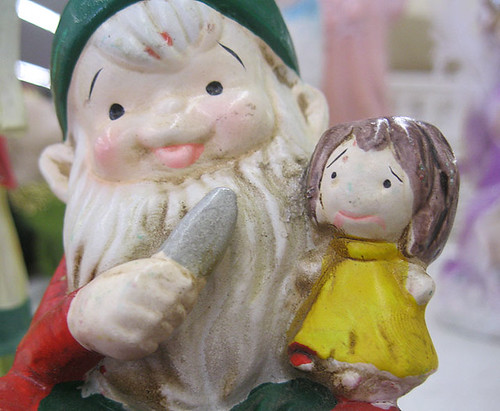 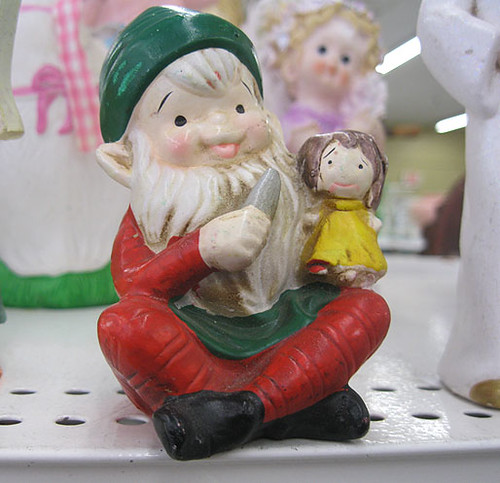 “Now, just put down the lists, and tell the reindeer and all the little children that we are taking a BREAK this year, and that we do NOT make Nintendo DSs. Seriously, the other elves are going blind and not in a happy way. So…two weeks of vacation, and nobody gets hurt.” 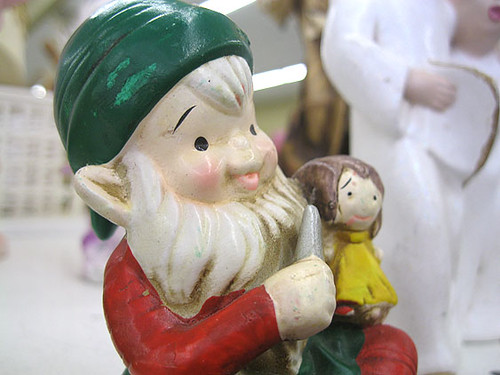 Needless to say, when Santa’s union-busters came in, this particular elf was never seen again, except possibly as another half-inch of rustic on the reindeer’s stable floor. 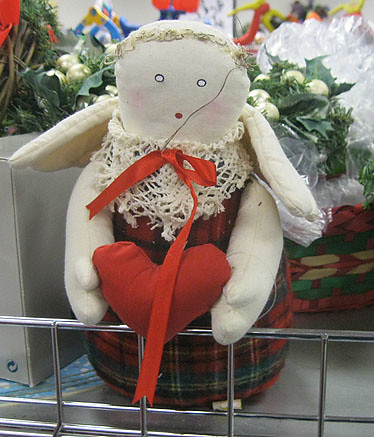 I worked in a Christian bookshop for five or ten years, give or take. I don’t particularly like angels. The cute ones are insipid, the majestic ones are tedious. But no-one, not even a plump little angel in a tartan wrap holding a fluffy heart, deserved this.Â  “I just…I just wanted to give you my heart. I can handle rejection, but my hair was so beautiful…why?” 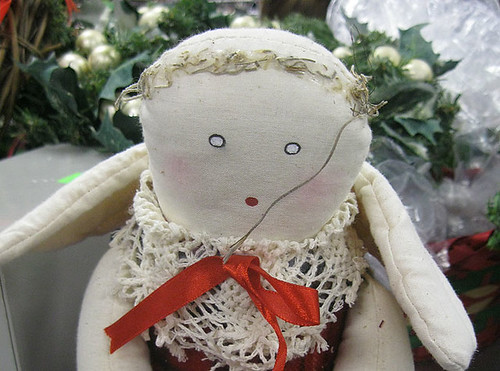 Yeesh. Poor thing! It set out to be a messenger of Christmas goodwill, and ended up looking like George Costanza. Really, how’s that fair? What about Christmas is fair? But to come down to earth from your fluffy pink cloud and then face off with a three-year-old with his mommy’s Fiskars? That’s beyond the pale.

We could wish that, in Heaven at least, there is no male pattern baldness.

From the “Angel Seconds” bin, a “Precious Moments” angel sheds a single tear, and takes off his halo. 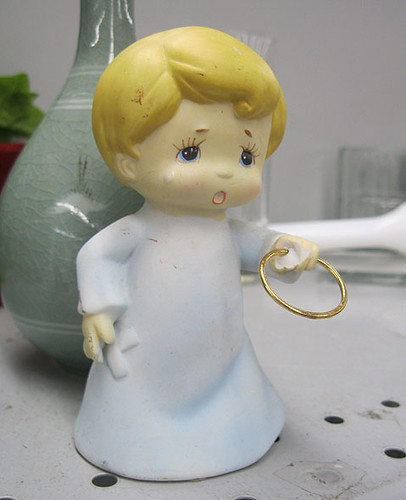 The demotion from “Angel” to “Choirboy” must have stung a little bit, but probably not as much as when they yanked his wings off. Poor thing–if it weren’t a “precious moments” figurine, I might feel something for you. Besides a certain dark glee. 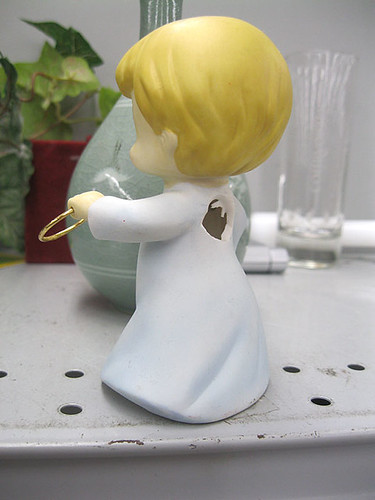 I think this deserves a wry grin. Schadenfreude pumpkin, will you help me on this one? 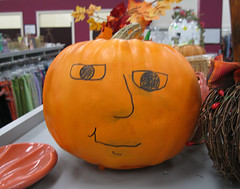 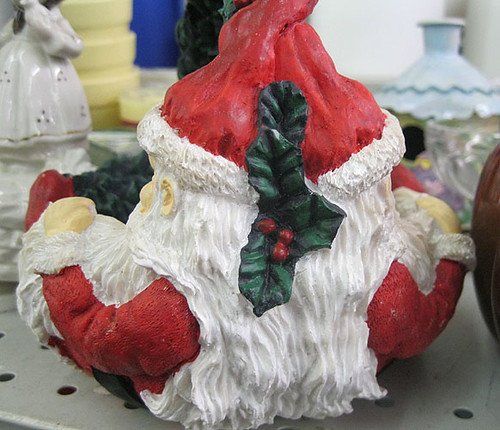 So…on this one, I’m left with a few options–assuming that the brick-a-brak shelf at Savers is factually and hagiographically accurate, which I always assume–one is that Santa was originally a pair of conjoined twins, and either had some very clever operation or else the mall Santas are deceptively non-conjoined and a conspiracy has lied to us for over a hundred years to keep us from the TRUTH. Another: that Santa reproduces by budding, or that he’s attempting to clone himself, and the results of this blasphemous nativity are of mixed success. Regardless…behold the truth of Santa 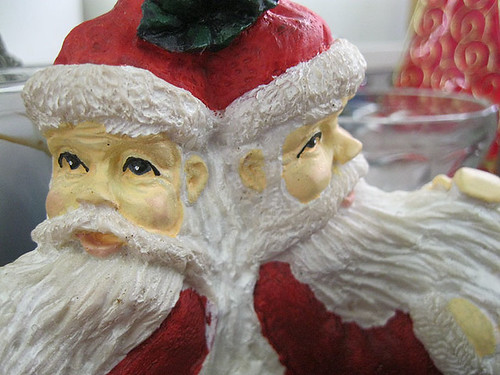 On the plus side, he still seems jolly, and that’s important when you’re a mockery of the human form and a sign that God has largely left humanity and its genetics to sort it out on their own. 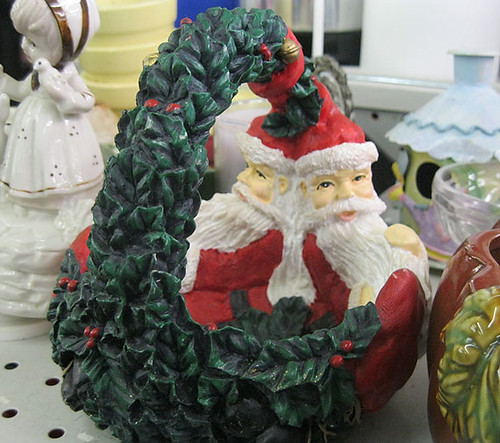 What I wonder is…how does he fit through the chimney?

Before you settle in for a left-over turkey sandwich and maybe some nearly-expired eggnog, think about the people that don’t have what you have. This christmas…think about people without heads. 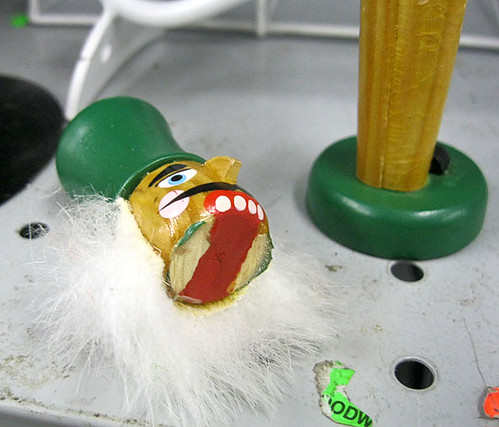 Another senseless nutcracker tragedy. Nutcracking must be hazardous work!