The kind of Clausses they grow here

Sheriff Santa–protector of the North Pole’s Wild West. Which, technically, is South, because…well, there are diagrams. Anyway. Santa doesn’t like people to see him like this. Because, when you’re spanning the globe at roughly 650 miles per second, in an open sleigh behind a bunch of reindeer, you’re not a right jolly old elf by the end of your journey. You’re exhausted, probably covered in caribou exhaust, and your hair is really, really messed up. Assuming of course that Santa has some sort of mystical protection against the hazard of his hair burning off at re-entrylike velocities, we might imagine him looking something like this. 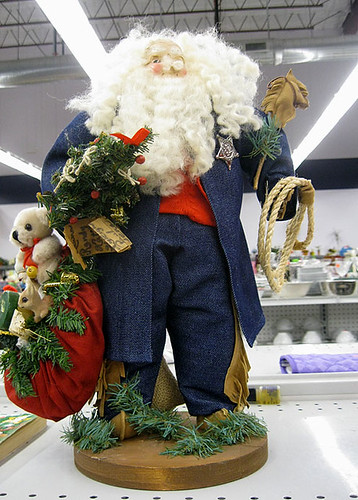 Particularly if he decided to fight crime among the pine forests of the Great West, and Mrs. Claus made him some denim pants and a nice overcoat. And actually, Sheriff Santa makes a heck of a lot of sense. He already knows if you’ve been naughty or nice. Judge and Jury, we only need an executioner.

Not sure why he has pine stuck to his shoulders. I guess once the sap gets on your hands, everything’s sticky.

So…about the effect that traveling at nearly relativistic velocities has on your hair. If you ever want to blackmail Santa, here’s your moment, because that is NOT a right jolly old elf. 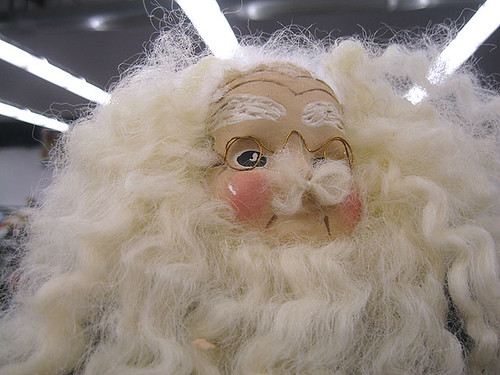 Good god. Please, Santa, use some conditioner next time. I swear, his mustache is crammed halfway up his sinus cavity.

Of course, Mrs. Claus has her bad-hair-days too, though she doesn’t tend to hop in the sleigh quite as much as Santa. Her sleigh-hopping days are a bit behind her, thanks, and don’t make a lady tell stories. Particularly after the lady’s apparently been in a bar fight. 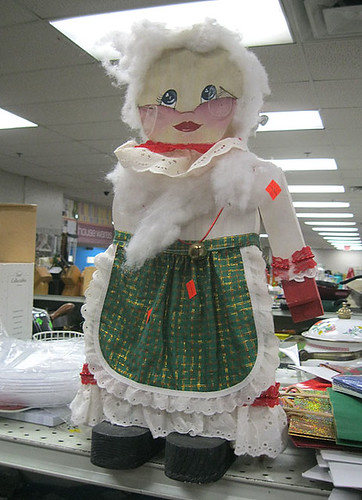 A fight that, apparently, cost her arm. Though she could probably give someone a world of hurt with those boots. Damn, Mrs. Claus. Are you packing iron in those Doc Kringles? 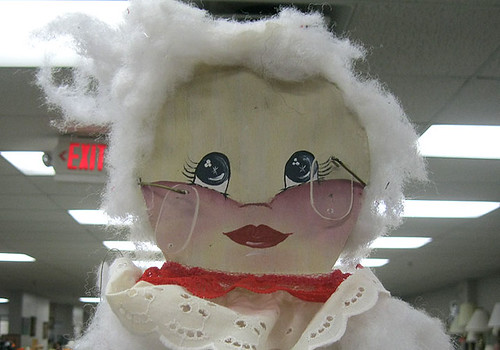 Takes a beating, still smiling. Though she might want to put an ice pack or a cold steak on those cheeks before they swell up any more. And sorry about the glasses. Maybe you could ask Santa for a new pair? 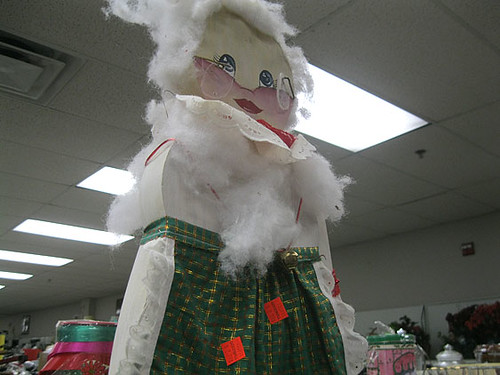 Mrs. Claus stands triumphant over her enemies! Fear her bloody fist of destruction! 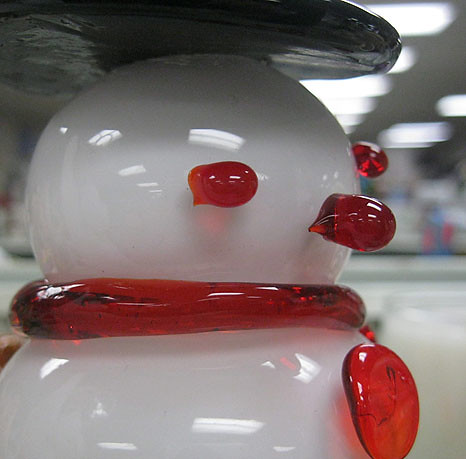 This supports my theory that snowmen are a race of aliens, possibly benevolent, from the Auriga Quadrant. They have come to earth for our carrots and coal. This one, unfortunately, has not found any carrots or coal, and he is angry. And when he’s angry, his nose and eyes pop out like a novelty squeeze toy. 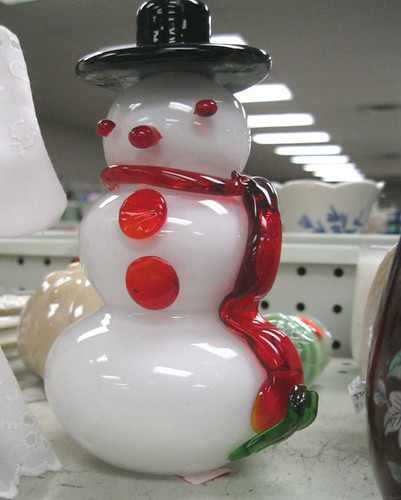 Don’t know what he stepped in, there. Maybe a Festive Christmas Slug. 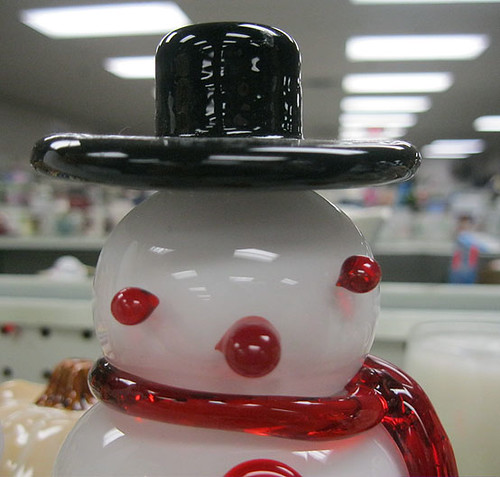 We have met the aliens…and they are Amish.

And we have met the angels, and they have very tiny heads. I really want my angels to be majestic, but something about “Christmas” and “Angelic majesty” tends to fail. This one has a higher degree of fail than usual.

This raises that old theological question: How many pinhead angels can dance? 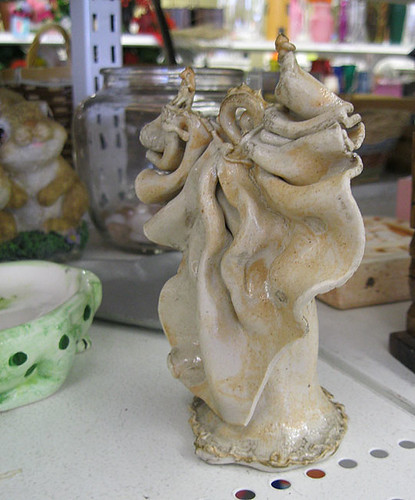 If it’s this angel, probably not one. S/he/it would probably just stumble over that enormous bib or something, and then its halo would slip over its face, and it’d just stagger around flailing until its little feet got caught in its massive, all-concealing robe, and then it would just roll around slowly making sad “perp” sounds. And we’d all feel kind of vaguely guilty for asking in the first place.

The nutcracker guard: Here to protect your nuts. 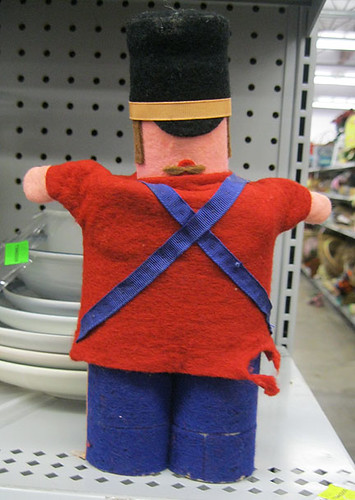 This particular nutcracker’s courtesy of Jim Henson Studios, who provided the initial designs and feltwork, and Quaker Oats, who provided much of the superstructure. I’m sure all nuts everywhere feel distinctly safer with this guy watching. Mind, all he does is watch, because of his ridiculouslyÂ  tiny arms. 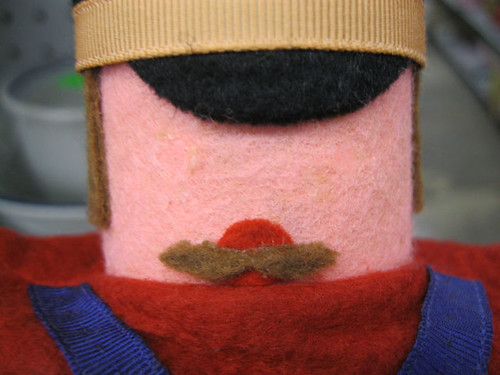 Actually, he doesn’t watch, because he’s got no eyes. He’s also lacking a bit in the ear department, and may or may not have a nose. If he DID have a nose, it’s got a mustache stuck to its front like a propeller, though he looks about as aerodynamic as a 1975 console television. IT might be his mouse, in which case he should stop chewing on that, whatever it is. Might be some sort of mole…really, he should get a dermatologist to check that out, if so.

Still, he cuts a fine figure. Or he did, until the accident. 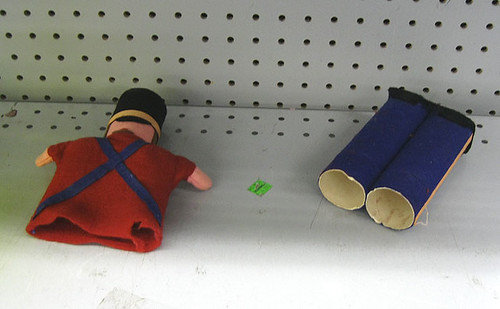 Sad, really. I left the store for an hour, and here’s what I found. Christmas needs to invest more in security, these guards are kind of fragile.

Let’s close with a decapitated Santa, always good for a laugh at parties. 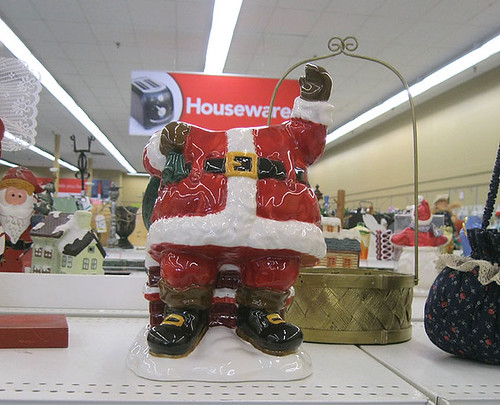 Through some strange process of metaphor, his hunger for cookies grew so profound that, like in a late 60s French surrealist film, he becomes his hunger, leaving nothing but a gaping void that wants to be, must be, filled with cookies. Oreos, for preference.

Scary beard Santa from Goodwill at the “Y” in Oak Hill, Fighting Mrs. Claus and Martian Snowman from the Goodwill on 183 and Metric, Tiny-headed Angel from Goodwill on Parmer near I35, Boxy the Christmas Guard from Goodwill on 2222 and Lamar, Headless Santa Wants Cookies from Savers on South Lamar, Austin.