Rejects from the Yule Files

I think we may have taken the whole “nativity” thing to its barest essentials. Baby? Check. Josef and Mary? Check. Sheep? Uh…couldn’t find pegs in that size. Wise Men? Hamster’s chewing on them.

I question the use of wood chips for the floor. It’s distracting. Just too much. Wouldn’t the ideal be just a circle representing the baby’s head, maybe with a star or something? Don’t get on the minimalist cart unless you plan to drive it all the way to the market. Really. 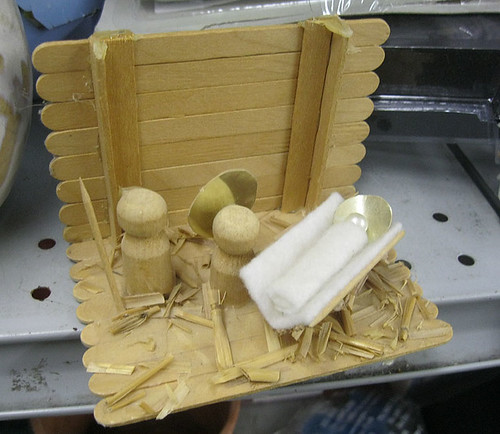 “Why does the baby have a shiny white head, Mary?”
“I’m not sure. The ‘Baby’s First Year’ book doesn’t have a chapter on messiahs. That may be normal for them.”
“It’s all so new, so confusing. The book didn’t cover angels and shepherds and wise men, either. I’m glad they left. It’s a lot different from helping with my little sister when she was a baby…more, I don’t know, eventful.”
“The rose smell is kind of nice, though. I wasn’t expecting that.”
“True!” 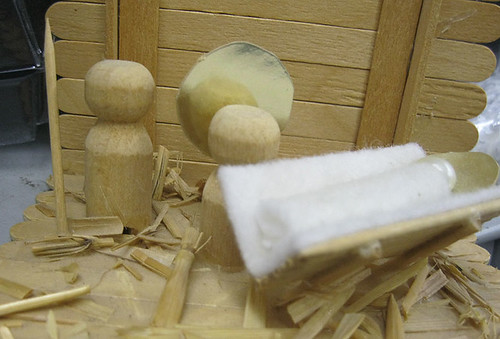 I guess you really wouldn’t want to make the baby’s bed out of wood chips. They’d chafe, and might attract termites, or possibly Child Protective Services. 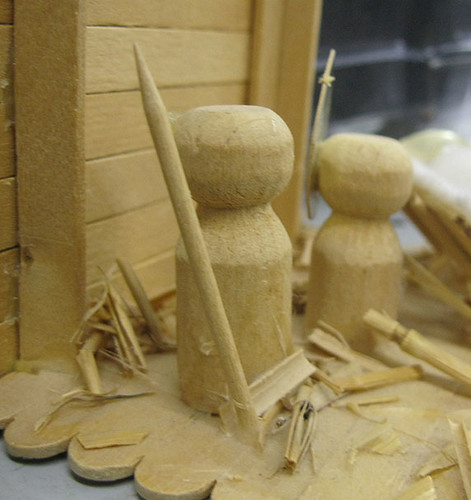 Woah. Nice staff there, Joseph. I like the sharp stabbing point at the end! I don’t remember seeing Jesus’s stepfather in quite such an “armed and dangerous” pose.

Maybe in this world, instead of sheep, they have little ambulatory meatballs? Then instead of a funny hook-shaped staff, you’d just spear one on a toothpick and then look around for some tzatziki. You wouldn’t even need to look very far, they’d just roll downhill.

On the other end of some nebulous, undefined spectrum, the Vaughans wish you a festive yule, in that unique “two stooges” way we’ve come to love and avoid. 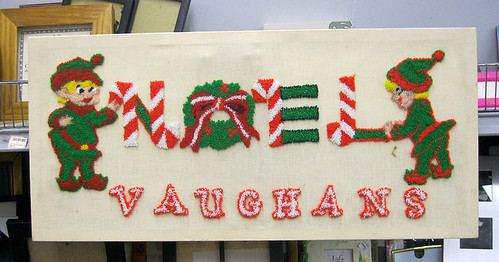 I’m unclear on whether this is from the Vaughans, or whether it represents the Vaughans. For the sake of the more fragile presents, I’m hoping for the former, but I can see why they donated this one. Any Vaughans out there, want to abandon your dignity for Christmas? Check out the 183 and Metric Goodwill, they may have just the thing for you. 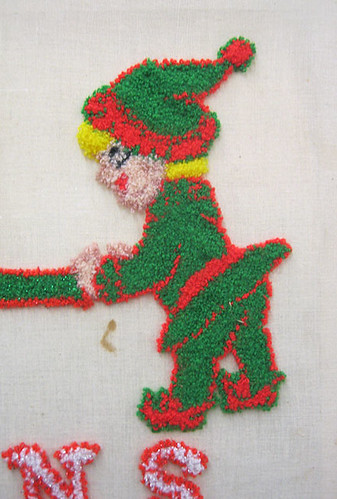 Somehow, I think this li’l guy is not on Santa’s nice list. Though I’m not sure it matters with elves. The only really important thing is whether they can hold a hammer and hit what’s loosely in front of them. Ideally, they can feed themselves and find the little elves’ room, but that’s pretty high-functioning, for an elf. 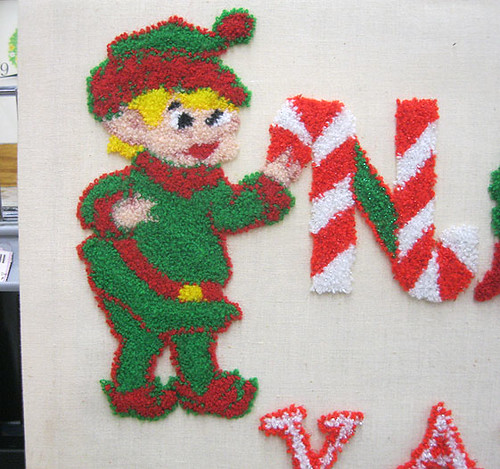 THAT’s an elf. Wandering around, arbitrarily candy-striping things. Thank god they’re mostly restricted to the North Pole area. There was the one time a cluster of them escaped and started breeding in Canada. Luckily the Centre for Disease Control was able to wipe out the colony before they spread to Montana. 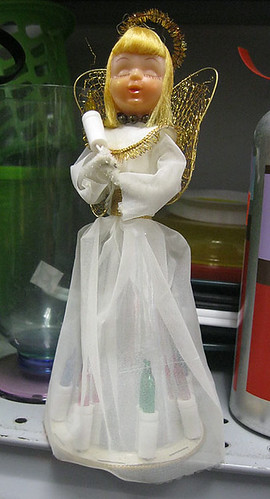 Personally, I wouldn’t put lights up my skirt. Though she seems good with the idea.

There must be a kit or something that comes with a bunch of pipe cleaners and an angel head, I swear I’ve seen this angel three or four times now. What cruel agency creates all these poor creatures, little cherubs with their hands replaced by pipe cleaners, I don’t know. They don’t look upset about it, so maybe I shouldn’t worry. 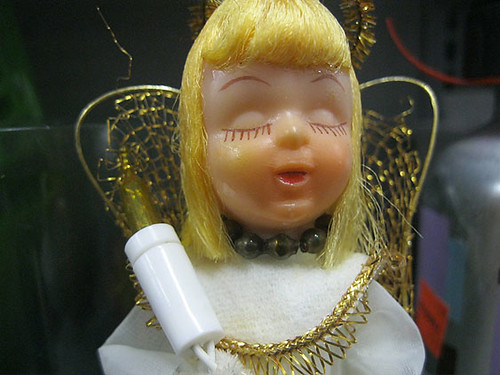 Never match tinsel and black pearls. Let this angel be a lesson to you.

So this next guy I found in Goodwill’s Blue Hanger–look, you can see the big blue bins in the background. At first I thought he was a fuzzy little Christmas potholder, but then he unrolled to his full, majestic length. So beautiful. 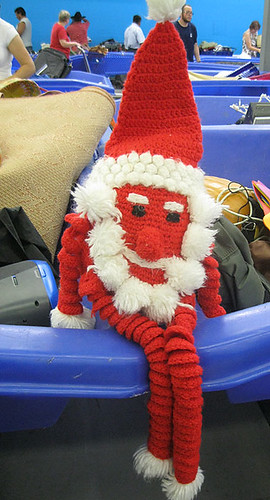 Santa only wishes he looks this good. 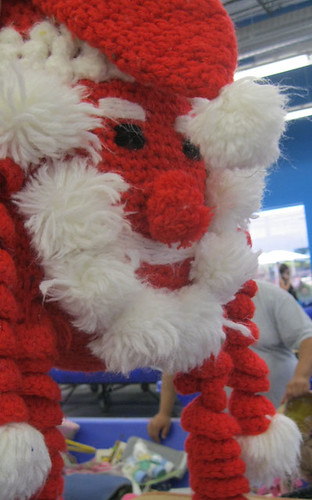 This one’s for the centerfold. Work those…uh…coils. 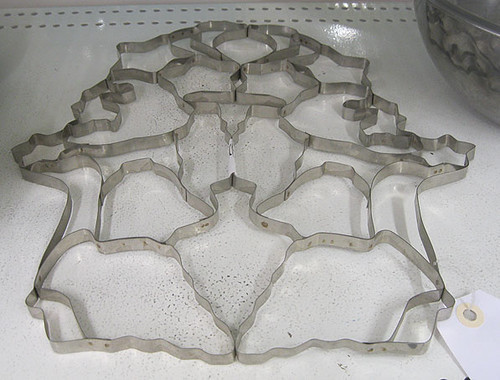 I admire the ingenuity of this–turning a single sheet of dough into a collection of holiday cutouts, in just one go? Brilliant. But I don’t recognize all the shapes. 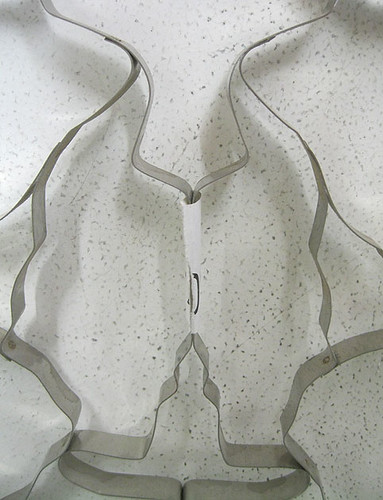 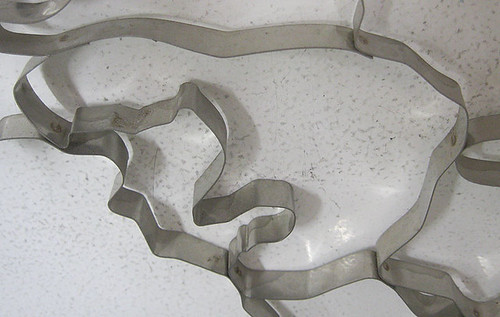 I think this is the festive Christmas fetus. I can’t be sure. If not, it may be some sort of Pokemon. It seems to be intentional, so it must mean something. But I’ll be hornswoggled, ideally by a team of professionals, if I can think what. 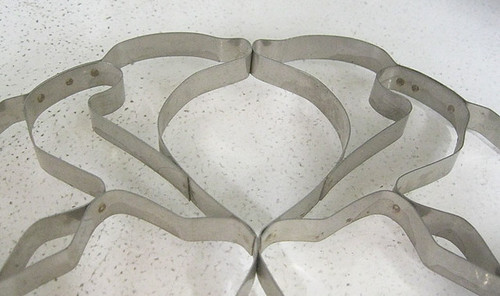 Christmas just isn’t Christmas without a pair of kissing-dolphin cookies. Mom used to make them by the hundreds. We sometimes still find them in, like, the backs of cabinets, in little piles under the sofa, and so on. The mice won’t touch them.

AS SEEN BY MARY: 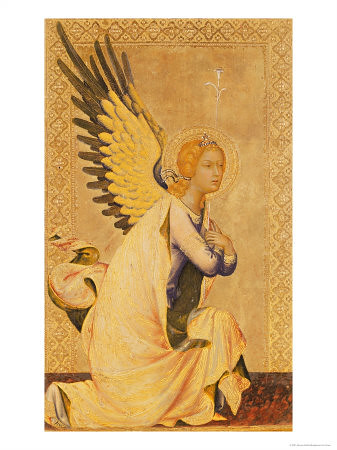 AS SEEN AT GOODWILL: 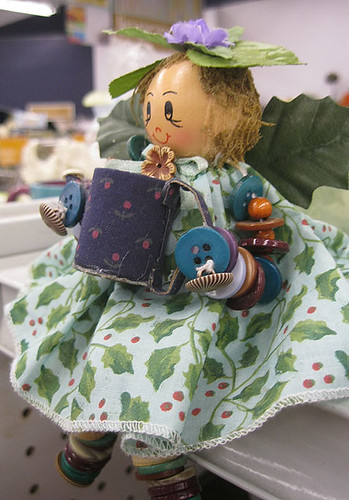 Note the contrast. This model has like 70% more buttons. In fact, her body mass is primarily buttons. And instead of bearing glad tidings, she’s bearing some sort of spool. It’s not so much “Do not be afraid!” as “Try not to giggle TOO much, it embarrasses them.” 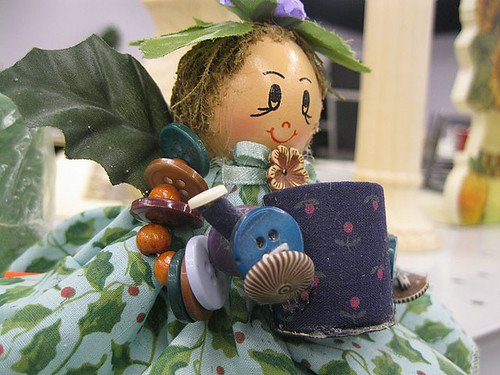 Your annual Christmas cuteness overdose. The crafters of the world are writing out a formal apology as we speak.

Tongue Depressor Nativity and Light Bulb Angel from Goodwill on 2222 and Lamar, A Vaughan Family Christmas from Texas Thrift on 51st and I35, Strung-Out Yarn Santa from Goodwill’s Blue Hanger, holiday cookie cutter from Savers on Burnet and North Loop, Spool-and-Button Angel from Goodwill in Oak Hill near the “Y”, Austin