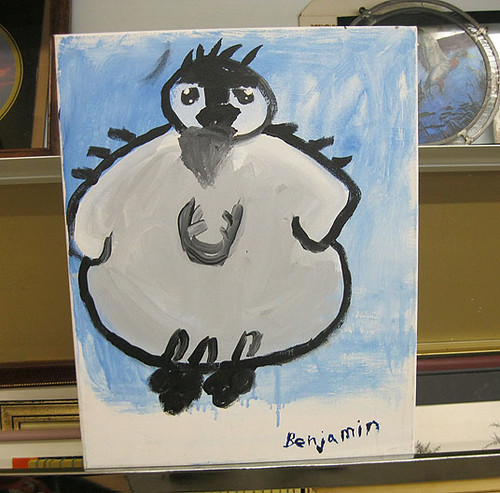 Pity the penguin drawn by a six-year-old. It is well beyond flightless and into the realm of the pathologically antiaerodynamic.

You may have noticed, Benjamin’s vision of a penguin is uniquely round. We assume that the loss of penguin life to sea lions and the Inuit people is astonishing. One penguin could feed a small village–of Inuit, not sea lions, which do not have villages as far as we know–for a week.

They do not swim. They are, however, buoyant. During their hatching season, they fill the waves with bobbing like a remedial soccer class practicing on an aircraft carrier. It’s magic. The sea lions think so, too.

Personally I don’t think Benjamin has seen very many penguins, except that one that fell off a building and killed his sister.

This particular penguin has decided it is NOT going to be eaten by sea lions or the Inuit, and has picked up a spiked helmet and shoulder pads from the Antarctic Murderbowl team. It won’t help, because the poor thing is as round and succulent as a Butterball turkey stuffed with bacon, but it’s nice that it puts up a brave front.

One Response to “Bird by Benjamin”