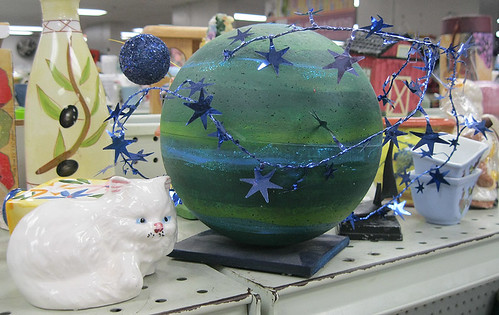 Planet Goodwill: Like Pluto, Planet Goodwill isn’t classified as a “real” planet. This is because so-called astronomers are not yet ready to wrap their fragile minds around a planet made of Styrofoam. Without their telescopes they’re so shortsighted.

Astronomers didn’t notice Planet Goodwill until 2006, because up until then it was eclipsed by a giant Persian cat. We still haven’t gotten a good glimpse of its presumably blue-green orb, but can infer its presence by its gravitational effect on the giant fluffy cat, occasional sightings of its sparkly blue-green moon “Savers,” and by spotting the sparkly stars that it occasionally sheds.

Distinctive features: Many planets have moons with eccentric orbits. Savers is actually nailed down to the planet’s surface with an amazingly, inconceivably large toothpick, large enough to spear 363 million olives. Its atmosphere, which is painted on, is dominated by a free-standing formation known as the “Great Green Smudge.” 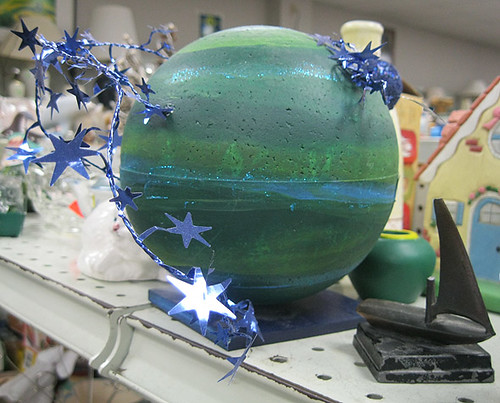 It’s the lightest planet in the solar system, occasionally being blown out of its orbit by a stiff breeze, or by the aforementioned giant fluffy kitten. Nevertheless, Planet Goodwill’s importance in our understanding of cosmology and philosophy cannot be understated, because it’s the only planet that is actually signed by its maker.