Slug in a box

I had previously thought that I’d seen every variation on the Thrift Shop Clown. Mutant ceramic clowns, bulbous blown-glass clowns, shell-and-macaroni clowns, acerebrated buffoons. This one was new. 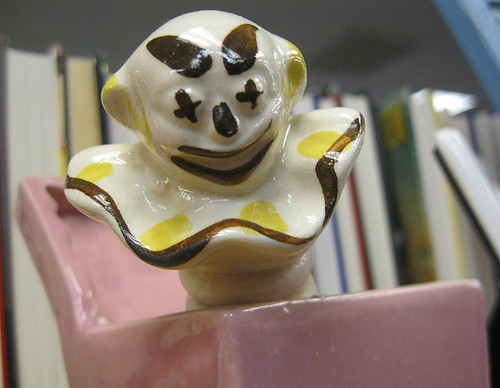 Just to begin with, he’s a really nasty little creature. Check out those eyebrows. It’s like he thought adding a Hitler mustache over each eye would enhance his comedy appeal. This is of course a failed hope, no force on earth can enhumor a clown, but this one isn’t even trying. It looks like the last thing a child ever sees after learning how to turn a handle. 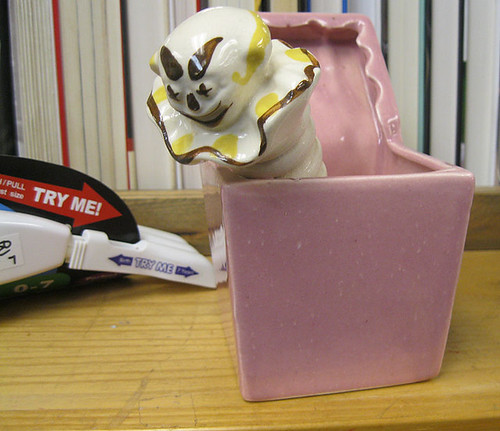 Hmm…in the interest of public safety, this one doesn’t actually have a turn handle. It’s probably for the best. I’m sure a lot of sudden infant heart attacks were prevented by that simple precaution.

Anyway, evil ceramic clown, blah blah blah, you’ve seen this one before. The artist’s real advance in coulrophobia induction is the brilliant “clown-slug” approach. This is a new one. 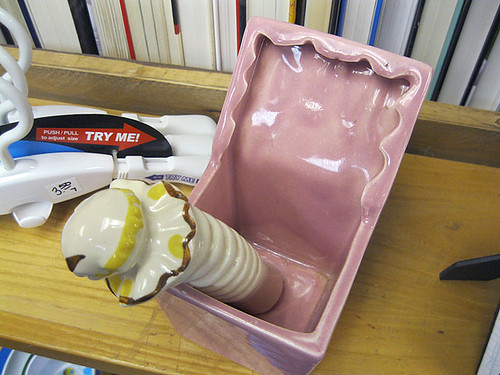 Ever wonder what you’d get if you added grease paint and ruffles to an uncooked, “feeds six to eight” German sausage? Wonder no more!

The pink box is way too innocent. It lures children into a false sense of security. They creep forward, expecting a prezzie, candy maybe, or even a puppy or an appropriate succedaneum–then, BAM, sausageclownslug. I know what I’m going to give my nephew once my sister’s speaking to me again.