Or another round of “Why did I photograph that? Really. Oh, well, it’s Friday, what the heck.”

This first li’l guy has been sitting there staring at me so long he’s kind of got “unofficial Flickr mascot” status. And looking at him, he’s not really that bad. Rather, he’s not that good, which is bad. Or–oh, sod it. Here’s a turtle on a surfboard. 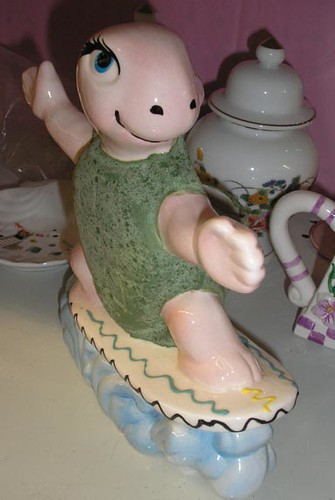 Okay, he’s no Donatello, but this turtle’s got skills. And, presumably, Revlon Lash Fantasy Total Definition waterproof mascara, because it takes a serious mascara to hold that kind of length and eyelash volume when you’re shooting down a barrel wave at a most un-chelonian speed. None of which is actually funny, but this turtle does have amazing eyelashes. 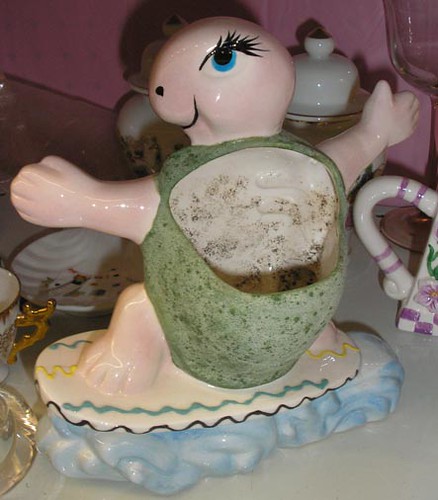 Some sick bastard cored this poor little dude and used him as a planter, and the worst partâ€”he hasn’t noticed. Like one of those eat-it-live lobster dishes where the entree hasn’t noticed that the better part of his rump has been abstracted and dumped in a brandy-cream sauce. But on a surfboard and stuffed with flowers. Cowabunga.

The temptation, at least for me, is to clean him up, run him through the dishwasher, and use him to serve soup. But there was only one of him, which is the eternal tragedy with dimestore surf turtles.

An oldie from 2006, from my young, carefree days when anything seemed funny. Also, from the Goodwill on 183 and Metric.