Should have thrown this one into the ring for Father’s Day.

But I didn’t, much to my shame, and now Father’s Day is nearly a year away. But the world can’t wait for Super Dad. 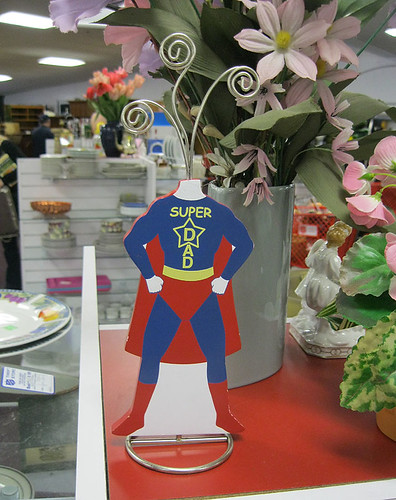 Superdad! With powers granted to him by our yellow sun, he fights crime with his power of invisible underpants! Superdad! Able to launch his head over a ten-story building (Sproiiing!!)

“Look, up in the sky! My god, where’s his underpants”

This piece brings deep questions of identity. Obviously, you wouldn’t give this to Superdad and put pictures of dad on it–that would be completely silly. So, what do you put on it? Pictures of what Dad really wants for father’s day? A new car, maybe a really good sandwich, or a sexual favor of some sort? No, probably not. This was meant to hold pictures of the family on it. So Superdad, in his heroic apotheosis, is subsumed into his role within the family to a degree he has never before experienced. This isn’t simply emasculating, his identity is to be consumed, utterly replaced, by pictures of his children, just possibly his wife. Or else he has no head at all, just some rather festive wiry springy things. For as long as Superdad sits on his desk at work, he will face this dreadful choice: Either give yourself entirely to us, and accept that you have no self at all outside the smiling faces of your family, or we will, metaphorically if not actually, have your head.