Another journey into dishware 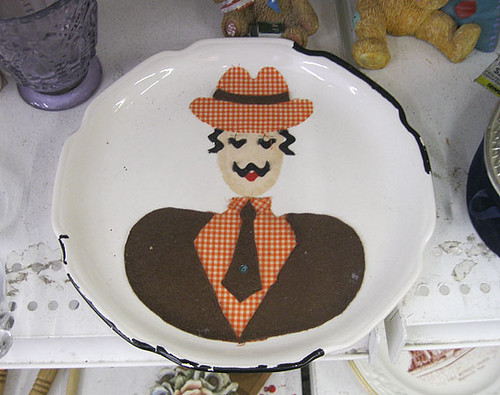 It’s not the sort of plate you’d want to eat off of every day. Or, indeed, ever. In fact, you’d really want to avoid foods with any sort of sauce, anywhere near it, because it would be totally impossible to avoid staining lapels that big with gravy, or worse, mustard, that stuff never comes out. And you couldn’t take that suit to the cleaners, really, because it’d convert directly to lint with 100% efficiency. That’s why people don’t wear felt anymore.

Although, I’m not so sure that’s a suit. This may be some sort of dapper Greek goddess, who like Athena before her, springing full-blown from the head of Zeus, is slowly forcing her way out of a pinto bean and into divinity. That’s probably why she’s wearing a shirt and hat made of tablecloth. She’s the new-risen goddess of simple table fare. And good for her. 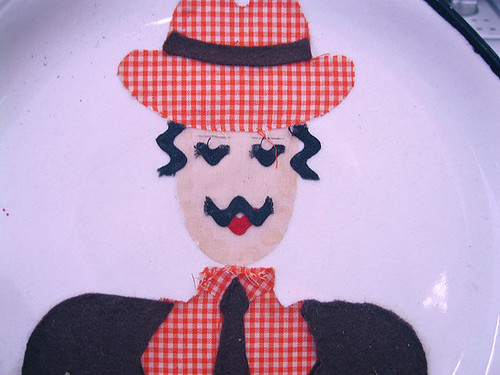 It is a her, right? Because the mustache is giving me kind of a weird vibe. Really, all the facial hair is a little strange. The weird m-bird lipsmear is just bizaare, but the strange black hemicircles under her slit eyes–or weird, dark eyes under molecularly thin eyebrows–either one, basically pretty abnormal. We’re not even going to discuss her neck, because there isn’t one. This is an exercise in cleverly-balanced ovals wearing a snappy hat.

Plate-ladies. Serve one with dinner. Pass the plate, start a conversation.

One Response to “Another journey into dishware”