That’s how they roll in Clownsville

When you’re dealing with clowns, you have to give up on a lot of what you, as a sane, rational human, view as “normal.” “Don’t wear size 38L shoes when you’re sized for a size 10.5.” “Don’t soak your boss in seltzer water.” “Don’t put cream pies down your pants, in someone’s face, or, indeed, anywhere except a refrigerator, table, kitchen counter, or manufacturer’s suggested pie caddy.” 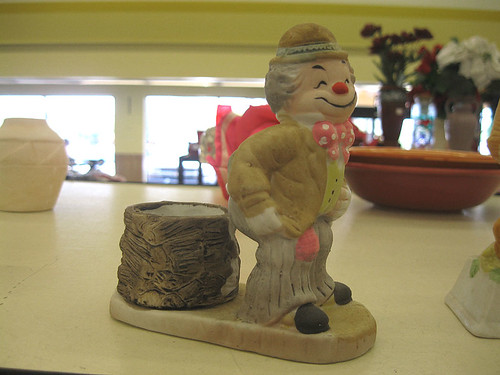 Though in point of fact I’m not entirely sure what he’s doing. It’s clearly biological. And he clearly derives no small amount of enjoyment from it.

Okay, so, I do know what he’s doing, I do. This is obviously a candle holder. Obviously. And he’s, just as obviously, warming up his clowny little backside. And yet, it’s hard not to imagine that he’s performing some sort of clown-science experiment, “Let’s see what color methane burns,” or some such. Because that’s how clowns do things, particularly how clowns do science. I’d be hard-pressed to think of any other clown experiments, except for testing the amount of carbon dioxide that could be dissolved in seltzer water under temperature and pressure extremes.

In fact, Clown College is actually combining these two bold experiments to create methane-based seltzer water, which wouldn’t, properly, be seltzer water, but something altogether less pleasant. Even with the high-level security clearance I get as a blogger, I haven’t been allowed to see the methane-pressurizing process, but I’ve been assured that it’s both very funny and a little bit embarrassing. More for me than the clowns, though, they don’t actually have that emotion. 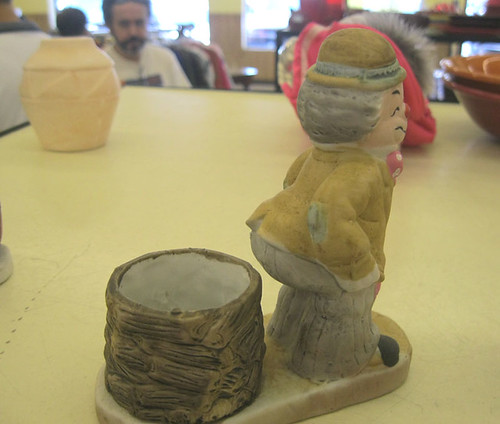 Oh clowns. Going there, so we don’t have to.

Thrift Town on Manchacha and Stassney