It’s got a pretty mouth to swallow you whole

Somehow, I don’t think being a semi-collectable vintage reproduction has really worked out for this kid. She–possibly he, maybe it, but we’ll go with she because of the amount of lace involved–aged pretty well, didn’t mess up her very nice dress over the years, even seems to have all her limbs–and that’s saying something, in a thrift store! 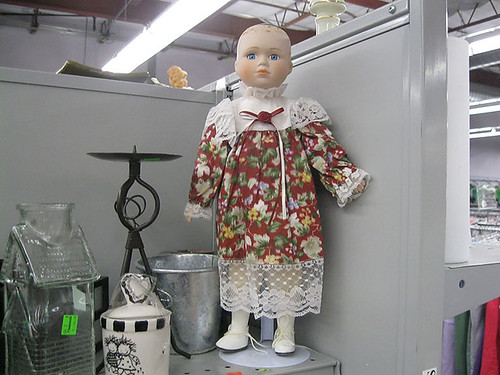 But the part where her head was shaved, and a substantial portion of her skull was replaced with a metal plate, didn’t go so well for her. That, we might go so far to say, was unfortunate, in that “My creature’s form, which I thought would be like that of an angel, now seemed to be abhorrent and twisted!” sense of the word unfortunate. 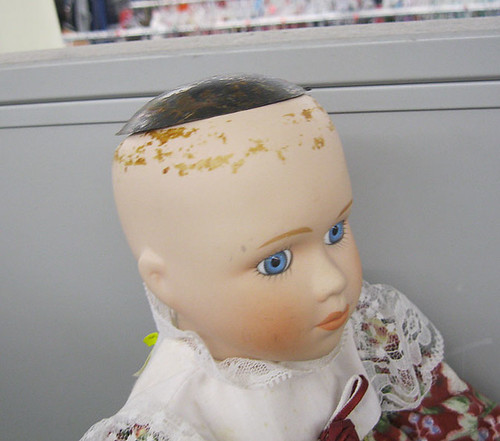 At LEAST try to get a decent seam around the edges. It’s a skull replacement, not a yarmulke. 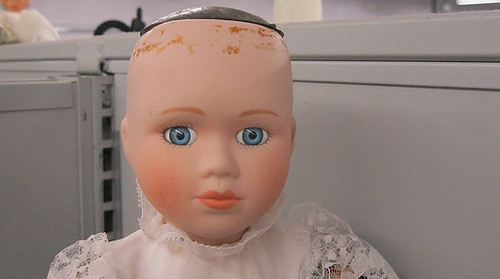 Poor thing. I confess to having a soft spot for maimed dolls. That whole “created in our image, innocent and young, made to be defenseless, waiting for the nursery magic to make him-her-it a real boy-girl-heffalump” thing is on some level pretty powerful stuff. But on the other hand, you see an awful lot of nursery magic worst-case scenarios at Goodwill. The Nursery Magic Fairy is a horrible imp, like a first unrequited love that shows up again, when you’re like 93, abandoned by your kids in a nursing home, and says “oh, yeah, I’d love to go dancing tonight, I just now got your note, is 7:30 good?” and they haven’t aged a bit. 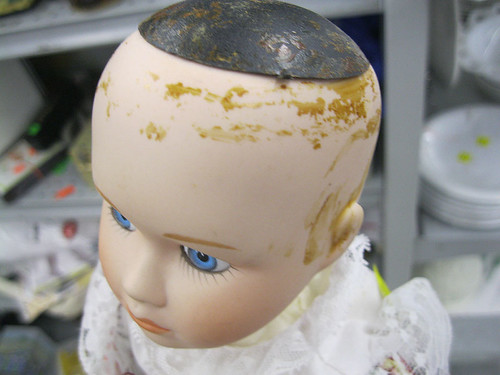 Though exactly why she needed to have her skull partially removed and replaced with a metal plate is one of those special thrift store mysteries. Was she wounded in the Crimean war? Did she receive a badge for heroism after smuggling medicines, gunpowder, letters from home, and 15 pounds of Twining’s Earl Grey to the troops in her chemisette and cranial cavity? I hope so, she really needs a medal or something.