I’ve meditated for many hours over these two artifacts, trying to guess…why? What was the artist’s intent? Was there an intent, or is this just another example of Craft Grannies Gone Wild? There’s a certain “found at an art show amidst a shelf of their kin” element to both of these…a standardized shape, distinguished only by the clever message. If it’s a message. Messages, as I understand them, transmit meaning, whereas these only transmit a certain vague confusion, possibly unease. They’re the “twin peaks” of craft pottery. 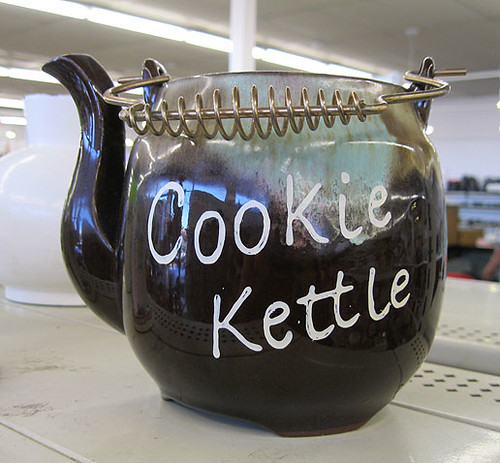 I would think that they’d kind of clog up the spout. I guess, if you pulverized them, ground them up really fine–and if you were talking about, say, Nilla Wafers, not Oreos, because the cream filling would just gum up everything, spouts, arteries, whatever–then maybe you could actually pour yourself a nice cup of cookie. Or at least a mug of crumbs. And who doesn’t want a steaming hot cuppa biscuit on a cold winter morning?

How long do you think it takes cookies to come to a rolling boil, anyway? Do you steep them?

From the enigmatic to the mildly offensive–I’m going to have to give the artist credit, this one actually borders on clever. 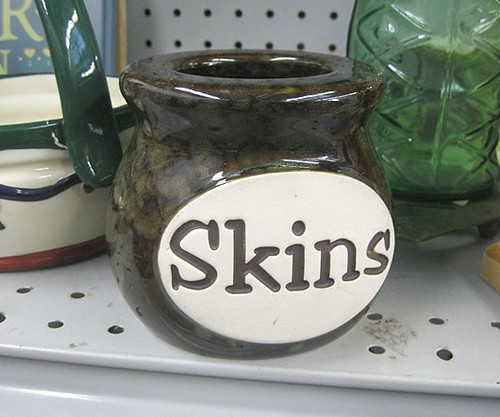 Initially, I was just a little bit creeped out by this. I looked in side it, no skins. I wondered if possibly there was a “shirts” jar somewhere. I wondered if I’d left the stove on, and if my pot of cookie had boiled away again. I wondered what I was missing. What the hell was this jar for?