In honor of the new “Smurfs” movie, and what a great honor it is, we proudly present…whatever the hell these things are. 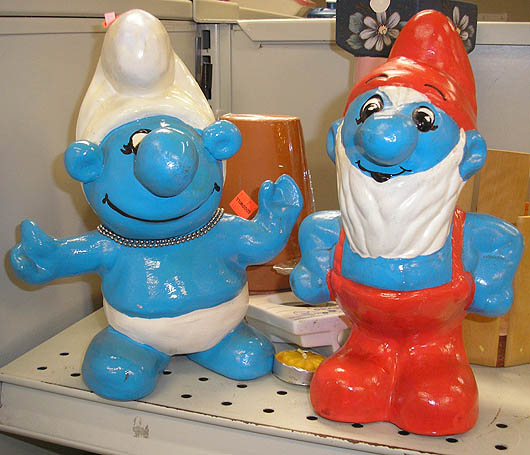 Which are probably smurfs. Or at least “inspired by” smurfs, in the sort of loose, Hollywood sense of “inspired by” which gave us “The Cat and the Hat: The Movie: The Video Game.” Oh, and what pseudosmurfs these are! Distorted by a ham-fisted sculptor and the terror of the Peyo Estate’s mighty army of copyright lawyers, these poor little blue guys are weird, must un-smurfy mutations of their original selves. I think I’ll call them Smiirfs, to distinguish them from a childhood memory I still have some love for.

The poor guy on the left has had it the worst. They stole his knees. THEY STOLE HIS KNEES!! The ubiquitous smurf tight-fitting speedo briefs, rather than being the sexy figure-hugging weapon of seduction that they are, now become something more like a diaper wrapped around some sort of overweight fungus in an ageplay-mycophilia smashup so unpleasant there isn’t a fetish group about it, even in Japan.

And yet, he’s still happy. Thumbs up, squashed, bloated blue truffle thing. Go put on some clothes now. You’re past your smurfkini days, sir. Plus, your chain is clashing with your mascara, we can’t have that. 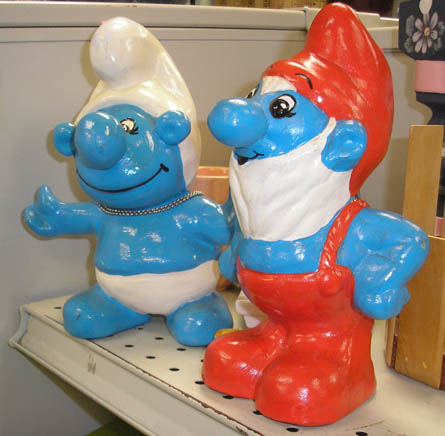 Who’s in a commanding, “Paul Bunyan” sort of pose, and has graduated from the smurfkini to some sort of smurfy red overalls. But there’s something wrong, so wrong, with his head. it’s about as head-shaped as an ice cream cone, a weird blue wedge suggesting a container from which smurf-type products, like smurfpaste and Preparation S, can be squeezed. Just get a grip on him and remove the red cap.

We are officially creeped out by his plumage, facial and otherwise. The beard is very strange–more like a thin paste spread evenly over his neck and chin, maybe to baste on some flavor, maybe he just wants a shave (just don’t touch the chest, it’s 70’s night at Studio 54.)

Goodwill on Metric and 183, and they were there for WEEKS.