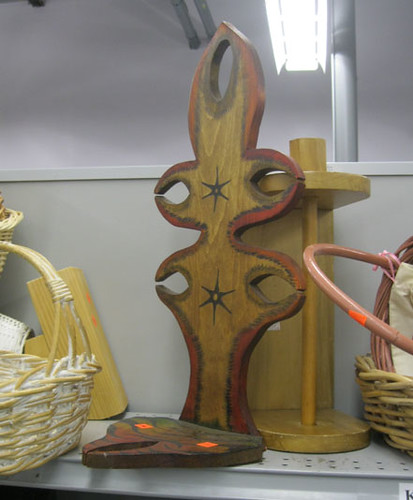 This was threatening customers in the “Woodcraft” aisle of the big Goodwill on 2222. And they were right to feel threatened. It’s hard to say if this is a wood shop project or an alien life form, ready to crawl from the top shelf, scuttle around the corner to the toy section, and disembowel and/or impregnate a giant stuffed pooh-bear, all the while clacking its mandibles/pincers/ovipositors to say…”you’re next. You know you want it. Unless it’s disemboweling, which you probably don’t want.” 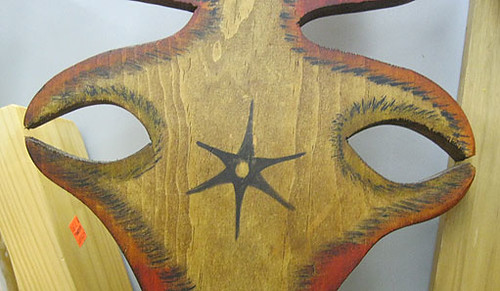 Behold, on its thorax it bears the sign of ill omen, the likeness of the star that foretold its coming! The wake of its destruction shall be TERRIBLE, but really, it’s a thriftshop, and it’s Sunday, so pretty much the same as those four kids over there farting around in Housewares, no change. I’m not sure the pooh-bear would agree with me on that count, but it’s a good blanket generality.

From a distance, that was kind of a nice shading job. From the top, it looks like the entire thing got covered in gorilla hair. It looks like my uncle Jeff with his shirt off. Tattoo’s kind of the same, too. 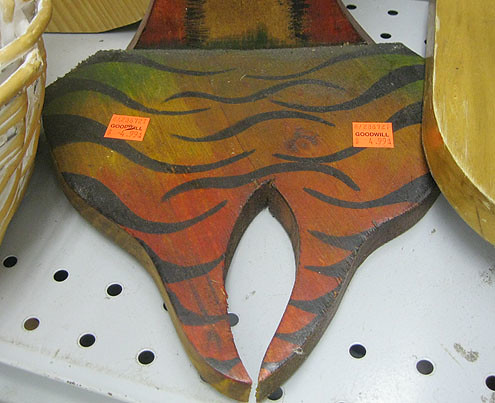 Yeah, we’re keeping away from that. I don’t care what you’re into, some things are just danger signs, and a tiger-striped stinger the size of a catcher’s mitt is probably one of those. Wait until it’s distracted by the super-sized “Good Luck Bear,” savor the irony, then run.