Please rise for the Pledge of Allegiance

At some point in time, not too awful long after the Thirteen Colonies, there was some divergent evolution in the flag department. 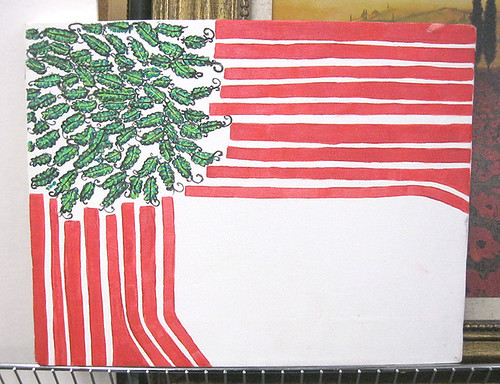 It was more or less around the time that Martha’s Vineyard became the nation’s capital, that was when things went a little cattywumpus. The 76 colonies had just declared their independence from the Ottoman Empire, giving Mustafa III the finger in the event that historians would later call “The Boston Dolmas Party.” In the new flag, each colony would be represented by a grape leaf, one that was open instead of filled with a tasty blend of rice, onions, and mint–this showed how the colonies were open to a new future, instead of being stuffed.

The seventeen stripes have evolved over time–originally there was only two stripes, the same red as the Ottoman Flag, to remind the colonies of their past and of the hard war they had fought–or at least the terrible and unconscionable tariffs on za’atar imposed by the sultanate. However, they eventually became oddly curved and densely packed, representing the intersection of VFW Highway and Bridge Street, to celebrate how that famous intersection stood at the turning point of the Revolutionary War, causing a massive 87-cart, 14-horse, and two-boat collision that caused both French and Turkish armies to be two weeks late to the Battle of Bunker Hill.