How an Olive Becomes a Butterfly

Another gift from the 1970s, and its strange love of merging the fun of handcrafted yarnwork with the color palette of a military maneuver covered in mustard. Oh, joy! 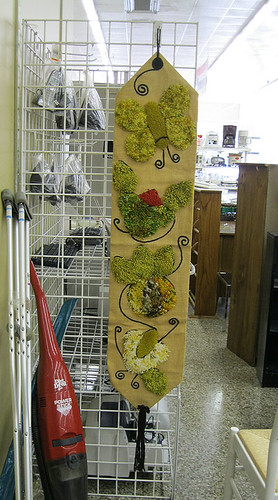 So…I’m thinking:
1) Weirdly phallic butterfly descending from Heaven,
2) Olive with pimiento throwing its arms up in celebration,
3) One of those new Japanese round pineapples,
4) Almond with protective hat calling the mother ship. 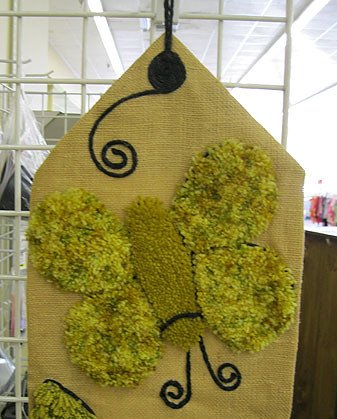 Of course, what this REALLY reminds me of is a bathmat. But the tapestry hook says no, this is Art, not Absorbent Material. Sometimes it’s a fine line.

Recently a friend showed me a pair of videos, both recorded from one of those new-fangled video game systems with a motion capture. The program would take snapshots, digitize whatever it was photographing it, and then turn it into a magical animated friend. Two things: It was not supposed to be used on living creatures, and it was not supposed to be used on, well, intimate, anatomically-accurate adult items of an insertable nature. Sooo…the first video showed what happened when you digitized a kitten–the result, a horrible, three-legged lurching monstrosity, with whiskers.

But when they animated the bright purple insertable intimate item, the result was absolute magic–a joyful winged sprite, flitting obscenely around the screen, with fairy wings and a trail of sparkles.

It may just be that this is fresh in my mind–indeed, burned forever into my mind–but that’s what I’m seeing here. Only it flew too close to the sun, and is tumbling down toward the ocean, condemned gods angry at the willful humans who dared put wings on a willie. 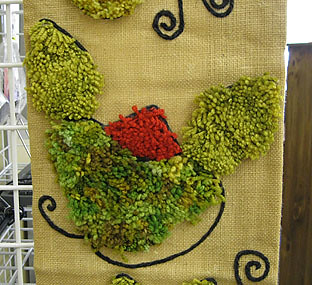 No idea. I thought maybe it was some sort of plant, or bug, neither of which are usually set with a smouldering ruby pulled out of the eye of a statue of a demon-god by doomed hands. Possibly it’s a fuzzy green volcano. That seems a little more likely, but I’ll be damned if I know why. 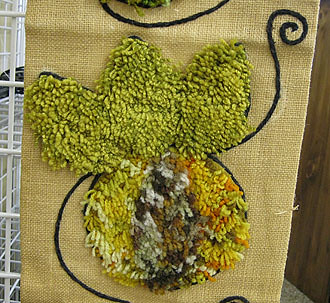 I’m pretty sure this is a pineapple, and the artist just ran out of space for the generally elongated platonic pineapple form, and made it a weird little pineapple orb. It might possibly be a gleaming tiger’s eye gazing into a blizzard, or a basketball tuned to a dead channel, but neither of those generally has a healthy crop of fronds, so I’m erring on the side of pineapple. 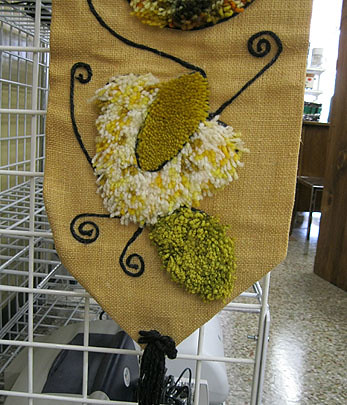 …and then there’s this thing. Is it an insect? Is it a flower? Is it a sophisticated communication device wearing a fuzzy hat? Only the 70’s know for sure.