Bears are kind of the “Stairway to Heaven” of the craft world. Everybody tries it once, and there’s a big sign over the craft department at Wal-Mart that says “No Bears.” Which is insincere because they also have bear-making kits.

For the record, I’m like 90% confident that neither of these bears came from a kit. Because someone would have had to greenlight that kit, and I can’t imagine what busy craft department executive would throw himself under the bus like that. 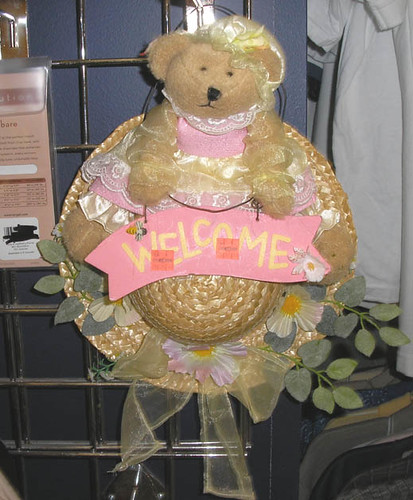 Welcome! Pay no attention to that bear on your hat. It just wants you to know that you are welcome. So very welcome. And if you brought your friends in, they would also be welcome. Ignore the bears hanging from the ceiling…they’re just here to welcome you, too. It’s been a long time since we’ve welcomed anyone, and we’re oh so very lonely.

This really is a portrait in blond. The ribbons are little golden wisps, the bear has long gold hair–the BEAR, which strangely merges Goldilocks and the poor ursine family she practiced her breaking and entering skillz on. Now, add some pink, and you’ve got a hat fit for the most Shirley Templelest little tow-headed cherub that ever sat in a field of tossing daisies. The addition of the “welcome” sign…and the bear…does somewhat mar the effect. I don’t think hanging a “welcome” sign on an aspiring Heather O’Rourke or Abigail Breslin is appropriate. It might attract Disney merchandising teams. 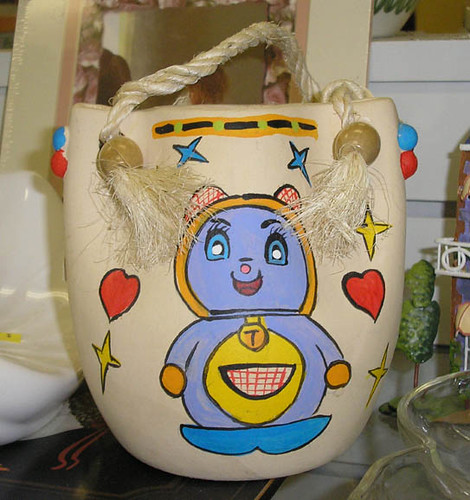 Good lord. I’ve had this thing lurking in my photo bin since 2007, and never really looked at it. What the heck is it? Is this some sort of mascot from an alternate-universe Japanese Olympic games, which, all things considered, isn’t that big of a stretch. It’s a huge improvement over the current options.

Either we’re dealing with some sort of weird seal-bear-wombat hybrid, or it’s standing in a salad bowl. There’s a certain “teletubbies” element here, but the ‘Tubbies never had that manic, “love me! LOVE ME!!!” grin on their faces–from what I remember, they wore faces of bland passivity, the only expression allowed by their dreadful sun-god. This guy–this guy looks like he’s about to pounce.

And even knowing what the critter is–which, really, I do NOT–doesn’t change the fact that I have no idea what this artifact is. It’s not a purse, purses aren’t ceramic. It’s not a bank or a vase, those are both things you can put something in. No, this is a clay pouch, sealed, with a carrying strap, or a hanging-cord, or something of that dangly sort of nature. Without any context, I can only assume that it’s a ceremonial urn to contain and shield us from the dreaded seal-bear-wombat god of love, stars, and hoodies, trapped within this clay prison since time immemorial, the dread image traced with a mixture of paints and blood as a warning to all those who would find it on the third shelf of “Housewares.”

Terrible Bear Hat from Goodwill on Metric and 183. Enigmatic ceramic bear-purse from Savers on South Lamar and 290.