There is a trendâ€”a weird oneâ€”in the Austin thrift stores. Someone, somewhere, has been pushing “DIY Diorama candles.” At least, I THINK that’s what’s happening–some sort of kit that you can use to create open-faced display candles, with bits of things glued to them, or parts of the wax scraped away in a relief carving sort of effect.

The trend, of course, is people dumping the damned things at Goodwill as soon as they get one for Christmas. And I’ve been seeing about one a month for most of the year. It’s a Bad Thing. 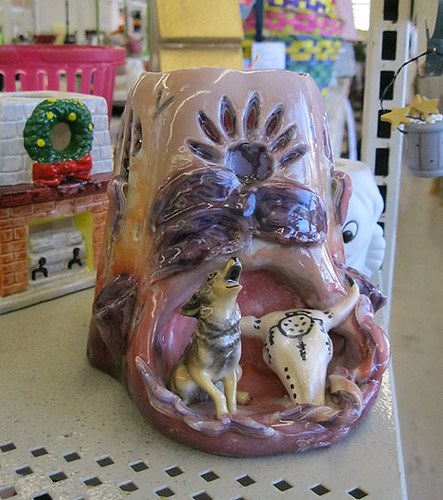 Take this crime against Arts and Crafts. Please note, it is not to scale. An the elephant-like thing hiding behind it in terror is not a part of the actual product. How do I know? Because the elephant thing isn’t the color of entrails at sunset. 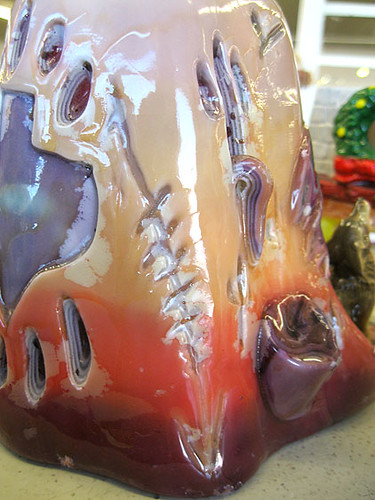 Puckered, scarred, and oozing, this is a cornucopia of ick. Like a carbuncle on the cheek of a Victorian begger terrifying you into giving him every bit of spare change you have, the artist has added a nice, purple bubo on the side of the thing. No idea why. Perhaps it’s meant to be the part of an adobe house where the dryer vents its steam. No clue.

The weird, cow-tongue structure dragging its way out of the saguaro cactus is only a little less off-putting than the poorly-stitched scar running along the side. If this is some sort of primative dwelling, why go through the trouble of stitching up its battle wounds? It’s only going to get into more fights, you’d hardly need to bother. 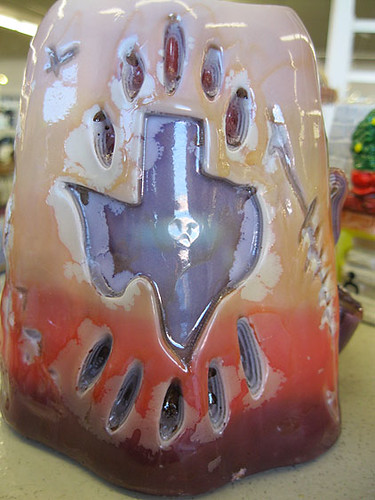 I’m thinking Jaws 4: This Time, It Got Texas. 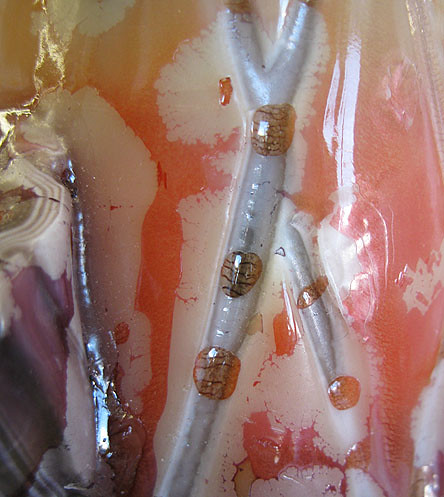 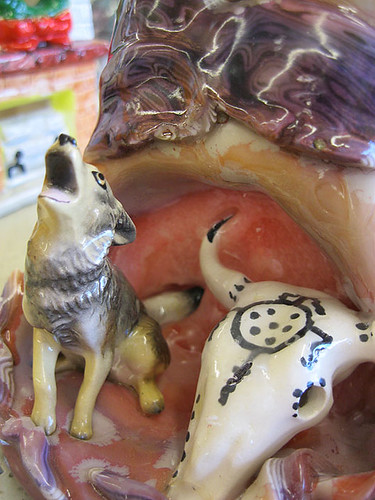 So…I don’t know an awful lot about coyotes. I’ve always assumed they were, you know, pretty much like a scrawny sort of wolf that lives on a diet of voles and housecats. Kind of doggy. I didn’t know they could increase their temperature to 1215Â° to melt dens out of sandstone and Texas granite. They’re pretty clever and adaptable, but not blast furnace adaptable. Note the tail eating itself into the rock behind him, and the molten pink lava flow around his feet. I’m surprised the cow skull hasn’t burst into flames yetâ€”but not TERRIBLY surprised, as Texas summers are pretty fierce and sometimes the rock gets a little melty even without the coyotes.