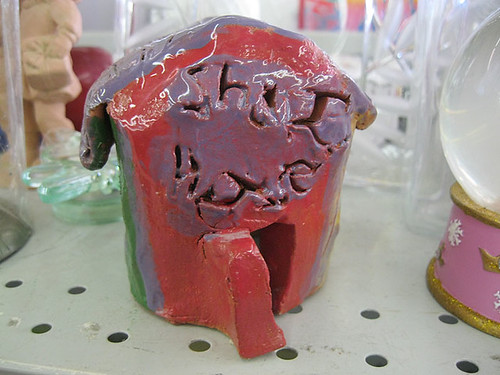 Won’t you come inside? No? Well, just don’t say we didn’t ask.

Once again, welcome to the strange and maybe a little tragic world of high school ceramics. Watch your step, the floor’s kind of tacky. Plus, like the sign says. BTW, does anyone know what font that is? I need it for a brochure I’m working on.

So, where to begin? We could, of course, start at the top and work our way down. I love how the roof is slowly sliding off toward the floor. Like the entire thing was made of thick shingles of tasty, tasty caramel, and it’s August in Texas. Gloop! Shingles slide to the ground in a thick, viscous drop of liquid roof.

And that is a nice, sturdy door. If you’re trapped in a shjL hust, don’t try to break through the front door. It’s Mission Impossible thick, reinforced with extra clay by a team of hard-working construction gumbies. You better get used to living in a hust, you’ll be there a while. 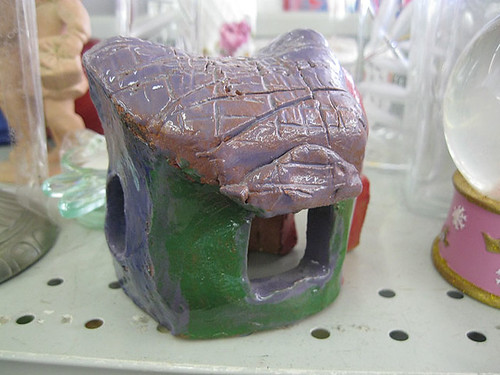 Unless, of course, you just slip out the window.

So, what horrible beast tried to break into this sad little hut? Twelve-inch talons, possibly sabres for teeth? Did the previous owners huddle inside their hust, fearful for the moment when the monster realized, “oh hey, window’s bigger than the door, it’s better than the drive-through window at “Porky Pie’s”? Or maybe night terrors and the vague threat of suddenly being eaten are just some of the amenties of a shjL hust. We don’t know, we haven’t lived in one. 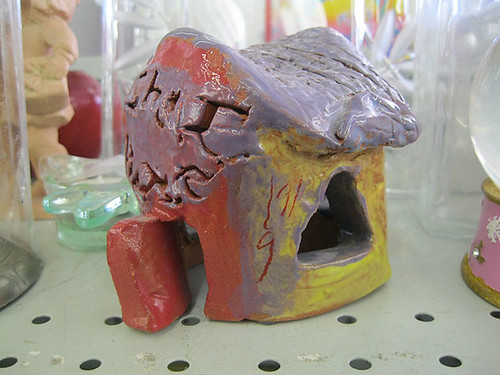 We rather hope we don’t have to, but at least they’re cheap. About as structurally reliable as a marshmallow joist, which might explain why the roof sags like a dorm sofa. I love the window, it would have been the perfect place to let a fresh-baked triforce cool off, until Ganon stole it. Again. Darn you, Ganon, stay away from my hust.

shjL hust from Family Thrift on Oltorf and South Congress