So, normally I have to *work* to find naughty, NC-17 stuff at the thrift store. Stuffed animals and dolls thrown into compromising configurations. Like this happy couple here. 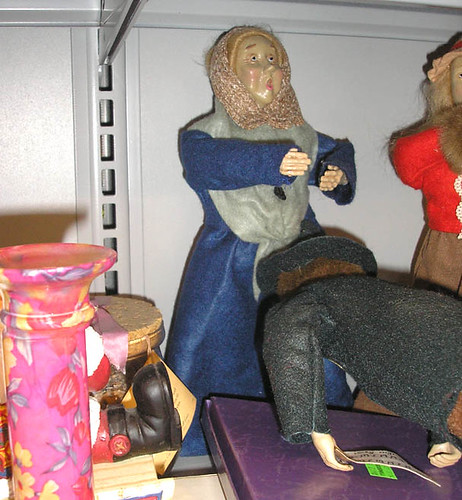 Actually, with the fellow passed out on the left, this might have been a pretty good party. With Santa Claus knocked out over there, and the Amish couple disporting themselves, it’s probably the most wholesome bacchanalia I’ve ever seen. I mean, the guy even keeps his hat on. Very modest. I don’t know what Santa was drinking, though.

And occasionally there’ll be a piece that kind of speaks to me, that says “there’s probably a reason I’m here. I’ve been remaindered for inappropriate behavior.” And, to be fair, sometimes it’s just that after months of trolling the thrift stores, things start to seem funnier. Even things that you might have given your teacher, or Grandma. Depending on what Grandma was into.

Trust me, with only three hours of sleep, this was the funniest thing EVER. 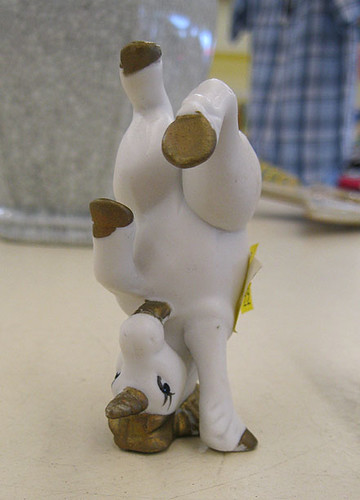 Although in retrospect, it was definitely funnier at the time, and now I feel like I have to explain it, and maybe it’s only “3:00 AM” funny. 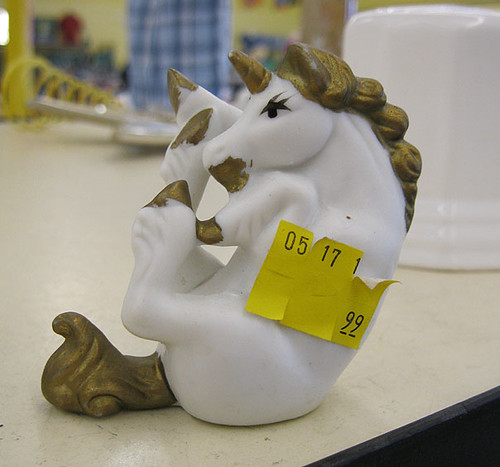 But it’s good that he’s trying to increase his flexibility.

But SOMETIMES the Thrift Gods hand you something on a silver plate. They say “Take this. TAKE IT.” And you do, and you say “Dear sweet Sally Mae, how could that have escaped them?” Is it even possible that an artist would create this and not…step back…and think about it? Or would they smirk and say “Oh yes, job well done, indeed”? 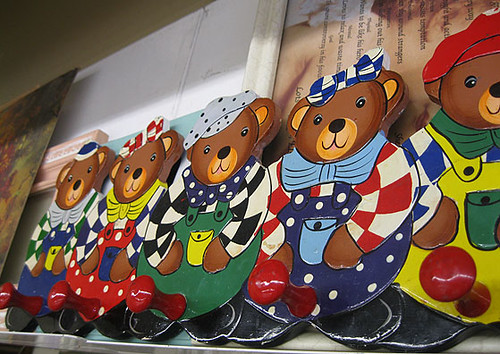 Here is a clear-cut case of design going terribly, dreadfully wrong. Really. One must ask, “why? Why there? Why red? Why are they so cheerfully smug?” 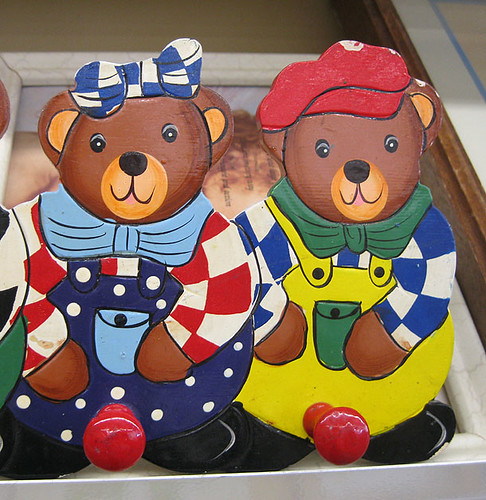 Well…maybe they have a good reason to be cheerfully smug. As coat hangers go, this one is certainly, well, hanged. I guess you could put a coat on it, a small coat maybe, or hang your keys from them, but that just seems inappropriate. Plus, if you had to send someone back in to get your keys, you’d have to say something like “It’s hanging on the bear with the cheerful red baculum, second from the right. The lady bear. I guess. I don’t know. It’s…so hard to tell with bears.”

Oh proud, proud bears, we salute you. Though to be fair, you saluted us first.

Strangely wholesome bacchanalia from Texas Thrift, where I’ve found a LOT of this sort of thing. I think one of the employees has a…special…sense of humor. Extra-flexible unicorns from Thrift Town in South Austin, and Proud, Throbbing Bears from the Savers on North Lamar.