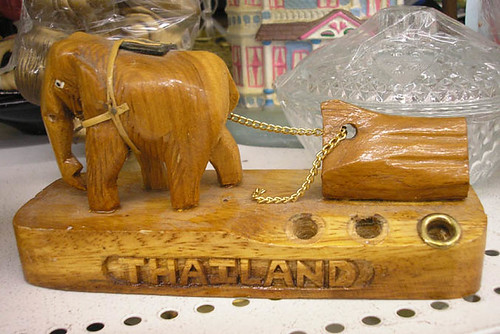 …And that was when the amusement park was finally shut down.

There’s a lot about this piece that I don’t quite get. I’m really not sure why the elephant has to drag a large log across an endless plain, and given that he DOES have to perform this thankless task, why is the log so perfectly sculpted for dragging. Was it a bad elephant? Did Zeus punish him with this utterly thankless task after he saw Hera naked? Why would Hera particularly care? Is this some strange legend from Thailand that I am not currently aware of?

What are the little brass sockets? I’m thinking that probably you put something in them, and then beat them with the log on a chain. That’s why the chain broke. And why the elephant looks surprised. 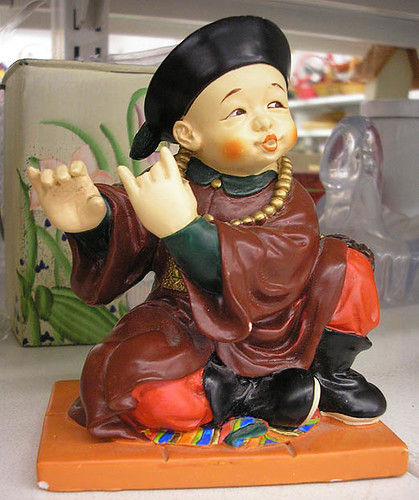 “Trust me, you should have heard it last week. It was like angels farting.”

I think I saw this guy in an all-male off-off-OFF Broadway production of Mozart’s “The Magic Flute.” It wasn’t the sort of thing you’d bring your mother to, though. In fact, I’m not really sure Mozart figured too much in it, and I think they added a few characters, because when I saw it in eighth grade I’m pretty sure there wasn’t a hot pizza delivery guy OR a Buddhist monk about to take a vow of celibacy. I may be thinking of something else altogether.

Both of these rare gems found in Savers on South Lamar