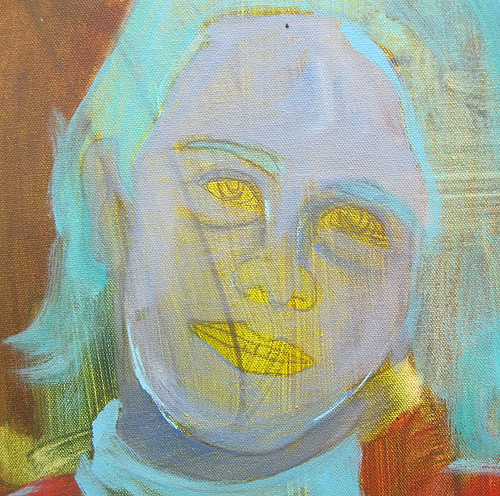 There was probably a turning point, a line someone crossed, where it became clear nothing could redeem this picture. Maybe it was late in life, where they realized there’s nothing you can do to turn baby-blue into a legitimate hair color. Maybe it was early, when someone asked “Is that a gap in her teeth, or a coin slot?”

Worse yet, maybe the artist is very, very good, and this is a picture from “life.” And by “life” we mean, “Oh look, George Romero brought a date.” 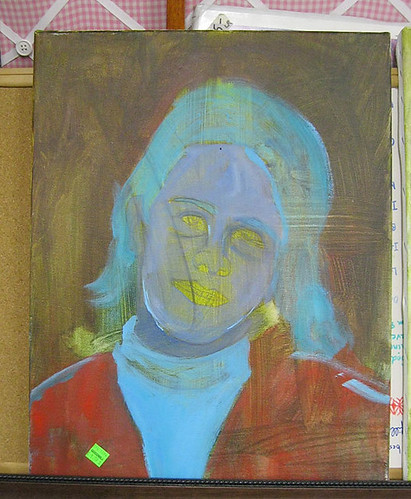 Kids! Find three things wrong with this picture! Or better yet, find one thing right with this picture! I was about to say “the jacket’s almost a normal color,” but then I noticed the glossy plastic-metallic highlights and thought, “no, that’s kind of effed up, too.” Like s/he/it’s shoving its head through a ruby red Christmas ornament, or a giant balloon, or someone grafted a zombie to a candy apple.

I was also kind of wondering if maybe this was some sort of clever photographic negative.

That just makes it worse. 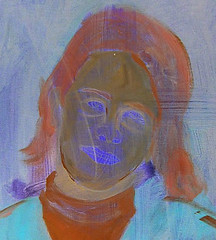 After scrubbing down my monitor with a well-deserved wash of baking soda and holy water, I really thought about the artist’s vision. Tried to get into the mindof the artist. Maybe his dad was Bozo the Clown. If my dad was Bozo, I’d have a lot of issues to work out. I’d paint pictures of clowns. I’d think a lot about clowns. I thought, maybe his mother was Vulcana, the crime-fighting descendant of the Athenean fire goddess. Which wasn’t actually that much of a stretch, my mom actually puts that on her rÃ©sumÃ©. With a background like that, you’d almost HAVE to draw clowns whose skulls are filled with yellow fire, so that it shines out of their nostrils. It really helps to put things in context.

Goodwill on 2222, along with about 15 other marvels. That was an AMAZING day. But this one…this one was special.