Dreaming of a White Christmas

Unfortunately I already used the photo of the “Have Yourself a Racially Pure Christmas” Holy Family, or I’d lead with them.Â  Instead, I’ll just go with these faceless marshmallow simulacra: 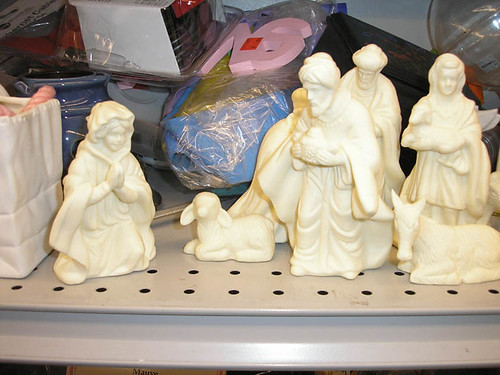 “How many times is this going to happen THIS festive holiday season, Mary?”
“He was right here. We were playing, the lamb came over, it was all totally a Kodak moment, and then he was gone.”
“Of course he’s gone. He’s white, the snow’s white, the shelf’s white, everything’s WHITE. Couldn’t you have given him at least a red sweater or something?”
“…Well, could you just leave the gold and myrrh for the lamb? It’s…probably symbolic of something.”
“No, Mary. And give back that spikenard, too.”
“Poopie.”

(Okay, not much of a horror, but I like nativities.) 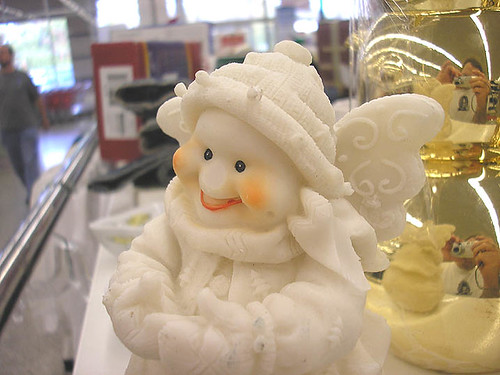 “I dust wat by DOSE for Christbas. I can lib widout by two front teeth.”

Angel? Snowman? Snow angel? Ghost of Post-Christmas liposuctions yet to come? These are difficult questions. S/he has a lovely healthy glow, but it’s…orange. Like the poor thing pressed its face into carrot juice in the vague hope that this, and gluing “twizzlers” onto its maw for something like lips, would make it look vaguely presentable, maybe a little human. It worked for Frosty.

Or maybe it’s just so that you can see it in the snow. Maybe it’s the LAST thing you see in the snow. Two beady black eyes, then a carrot-colored, fatal blur.

(In a sort of accidental “Where’s Waldo” moment, you can see both myself and my partner in this shot. Thrifthorror would not be possible without his patience, encouragement, and high-mileage hybrid vehicle.) 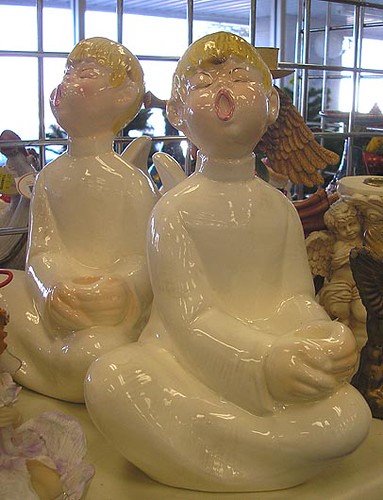 Whoo, that’s some excellent camera work there. If they were any dimmer they could run for office.

One could almost make a post that’s just “mildly suggestive choirboys,” and it would be both very long and irritatingly repetitive, because, well, the choir boy really speaks for itself. The hands on this little pair are a new addition to the Legend of the Willing Christmas Choirboy, though, one that I haven’t seen before–I assume they’re meant to hold little birthday cake candles, but to me, it says, wordlessly (because sometimes the Willing Christmas Choirboy is at a loss for words), “I can make two people’s Christmas wishes come true.”

Should I have included these guys in the angel post? Probably not. It was running a little long anyway, and I think that may be less of a pair of wings and more of a shark fin. A couple of these guys circling in the water after a ship wreck would be pretty scary. Choirboys have to keep moving constantly, or they drown. It’s true! 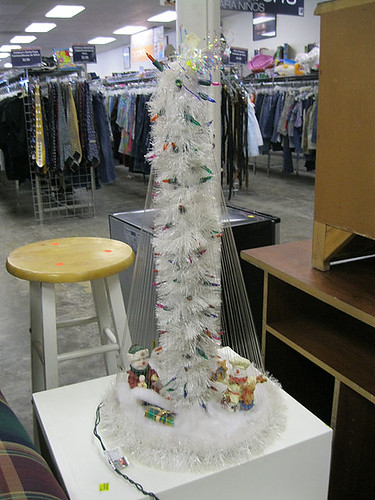 Santa didn’t come that year, or the next, or the next. It wasn’t so much that he didn’t like the Snowman Village and its festive frosty inhabitants, or that they didn’t celebrate Christmas or understand its true meaning, or even that they were particularly naughty, they weren’t, they were about as nice as lumps of ice could be. No, it was because of the giant spider. 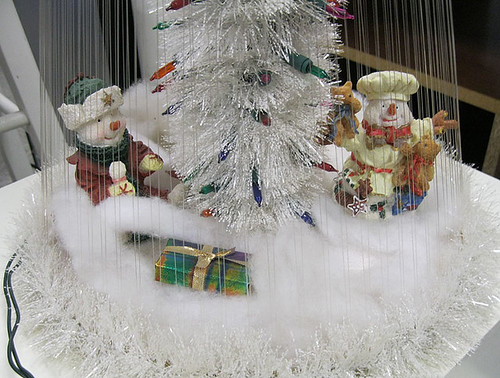 “Please, let us out! BIIIG present for you! A little help, here!”
“Larry, I don’t think they can see us. It’s a blizzard out there and we’re made out of snow.”
“Well turn on the lights. MAKE them see us.”
“Won’t the giant spider notice?”
“I don’t care. Let her come, I’m not spending another Christmas in her web! There’s a whole world out there, and…oh my god! She’s coming! She’s coming down! She’s…Merry…nooooo!!!”

White Nativity from Goodwill on 2222, noseless snowman from Savers on South Lamar, Choirboys and Christmas Tree under Webs from Goodwill near 620 and 183