Angels! They come in swarms of thousands around Christmas, drifting in clumps through card shops, idling in Wal-Mart like flocks of chickens, and, of course, hanging out on the most celestial shelves in Goodwill. I’ve seen more headless Santas than any one man should, but there’s something whimsically tragic about a maimed angel that never ceases to make me smile.

Particularly when they start getting into weird Christmas fetish behavior. 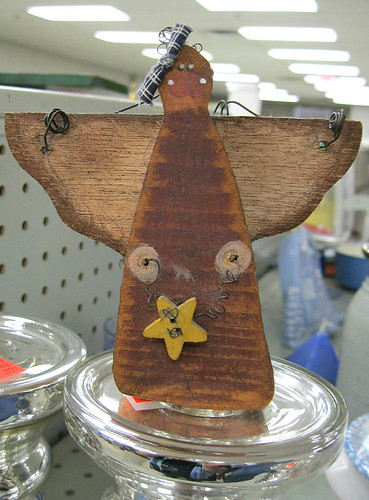 I have never, ever seen an angel with pierced nipples before. But I have to say, she completely made my day when I did. That sweet, innocent little face, you’d never imagine that she’d be combining gingham and bondage in one celestial package. “Hi! My name is Beatrice! When I’m not baking cupcakes for disadvantaged children or reorganizing my embroidery floss, I like to go down to The Chain Gang wearing nothing but a star and a smile! Oh, and this cute little bow that I made to go with my favorite skirt, but if black goes well with everything, it’ll go well with pain and 40-gauge wire.” 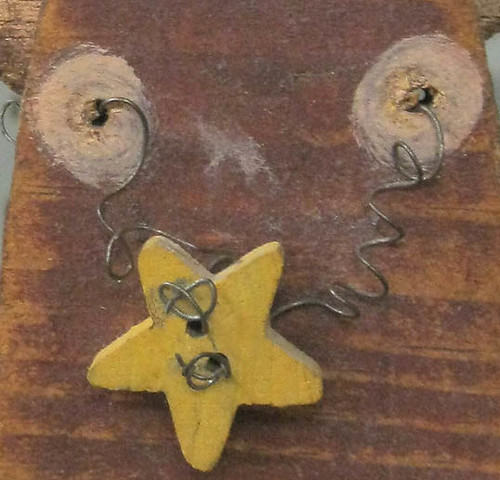 The back of this one says “Merry Christmas for a Wonderful Friend, for Stephanie from Paula and Harold.” One wonders about their relationship. If it involved angel bondage, I think I want to know more about their church social club. 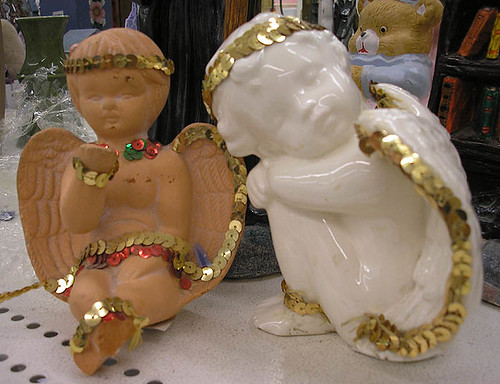 Who thought this was a good idea? Really. When does gluing sequins add to the majesty and grandeur of…anything? If you were trying to recreate that somewhat unsettling final Liberace Christmas Special, maybe you’re on your way there, but giving an angel glittery, 80s-style wrist and headbands is not a value-add. Yes, they were naked and creepy before, but you’re just calling attention to the fact. Next, you’re going to give them to a friend, and there we have to stop you, because this is the fast track to friendlessness. Signed, your holiday common sense consultant. 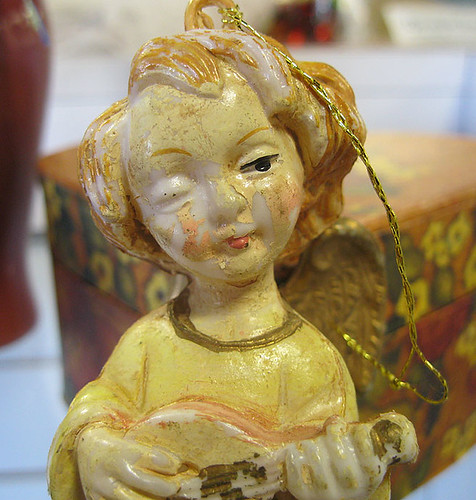 Yes, the terrible angel plague of aught-three had claimed her eye, most of her face, and her right wing, but she just kept strumming! 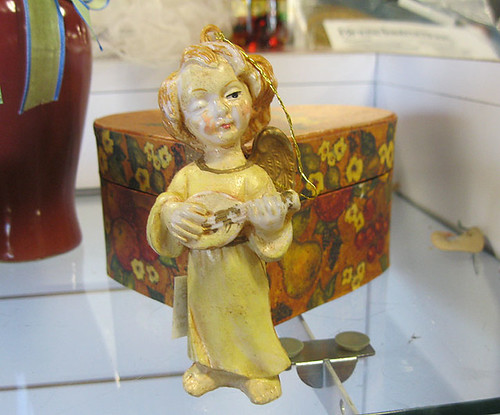 I like this girl. Something about her suffering has given her a wry, knowing glance that’s a step above the average angel–on the whole, a vacuous breed given to vague, wistful stares. She’s just about to write a satirical ballad, and is trying to figure out what rhymes with “Gethsemane”. 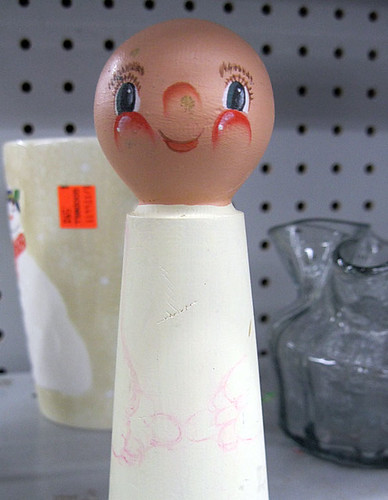 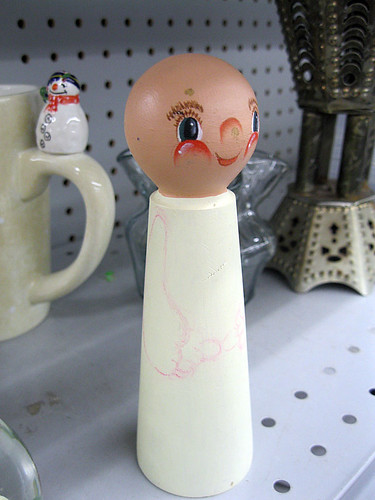 I don’t know what this is, but it was definitely in the Christmas section, so you get to deal with it now. The thick, avuncular eyebrows and “two pints of stout” cheeks really put me more in the mind of “Norm from Cheers” than a member of a chorus, either heavenly or earthly.

The little snowman on the coffee mug I hadn’t noticed before. Someone should spray for those. 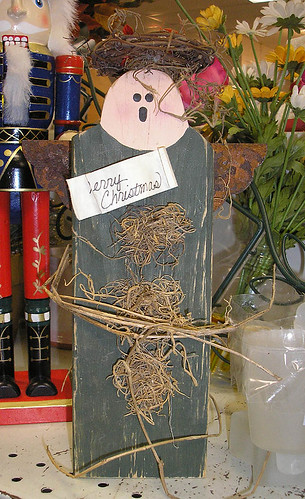 It’s Edvard Munch’s “The Angel.” He? She? It? Does not seem to be at all happy about being slowly strangled by vines, and having a messiah-like crown of thorns (okay, crown of weeds, which is much less hardcore) stuck to its bald, bald head. I’m thinking this isn’t so much a pretty little angel, but rather some sort of sick, ritualistic play, like a sequel to the movie “Se7en” where Kevin Spacey’s character tortures people to death going through the entire year of holidays, and let me tell you, the Guy Fawkes Day scene was both chilling and a spectacular pyrotechnic display. “We’ve found the victim. He’s bolted rusty wings to her and wrapped her in straw. I have no idea what this means…but there’s a note…oh god, it says ‘Merry Christmas’ on it. What’s next, Epiphany? I can’t handle this holiday madness anymore, it’s got to stop!!!”

…So, Heaven. After 10 years of church, I’ve heard a lot of good things about the music up there. The music of the spheres is well-regarded, the heavenly cantillating of “Hosanna” is supposed to be very good, they’ve practiced it enough. However, little is said about the musical accompaniment, the background score to the Laudate Domino, and frankly I’m a little appalled. If this is Heaven, I’m going to Newark. 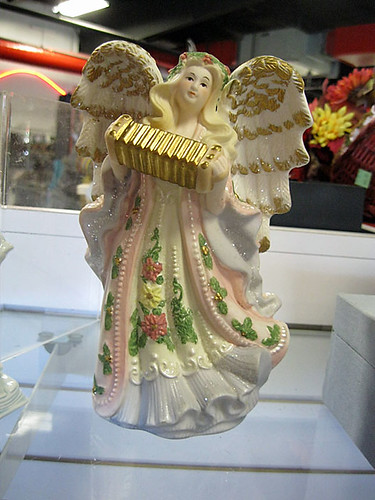 Oh, this is a brilliant, well-thought-out plan. Martha Stewart would almost certainly say “No, no, that’s a bad thing.” 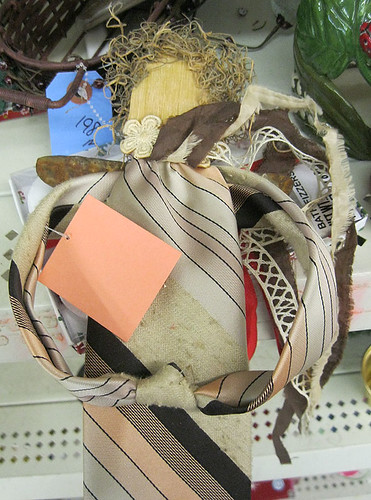 So, once in a while, apparently, you just have to craft. It’s gotta happen. Maybe you haven’t crafted in a few weeks or something, see a necktie, and before you know it, you’ve turned it into a mop-headed angel clasping its arms together. But there’s got to be a better way. This is the poster-child for craft abstinence. 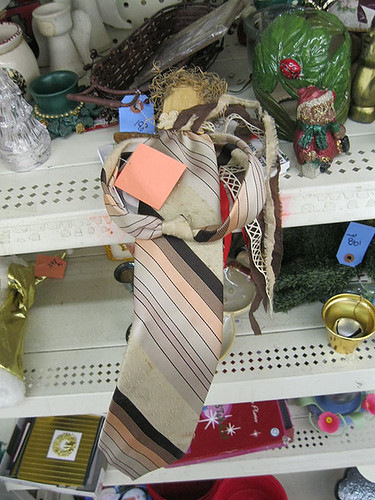 There are good things to be said about recycling, but this poor thing looks like it was taken off the neck of that fat, fat guy that smells of very cheap tobacco, and then made into an angel while he was struggling to get it back. It’s got that special discoloration of motel furniture. The saddest thing about that is that there weren’t 20 of them lined up together in a dreadful, faceless choir. That would have been pure necktie magic. 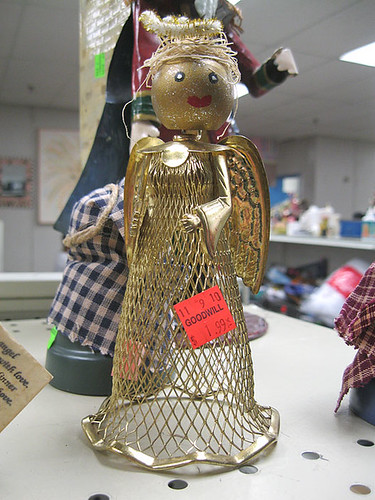 Fear not, for I have been sent by Our Lady of the Hardware Shop to bid you glad tidings and give you good news of a great sale in the east! Home Depot gives the gifts of Christmas this year with a 15% discount on all name-brand mulchers, and a free poinsettia with every purchase! Hosanna, hosanna in the highest!” 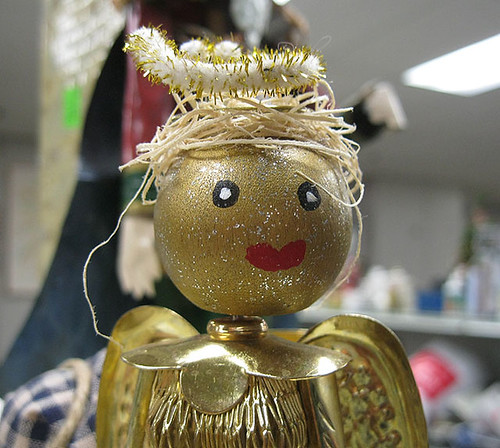 I’m not sure if this is a “handicraft” or not, the wings and stuff are actually pretty well-made, but that face screams “Senior Activity Center.” It’s the pipecleaner that does it. And the glue, glitter, paint pen, peat moss hair, and vacant, empty gaze. Any one of those, really. Maybe there’s a kit–20 mesh angel skirts and a blank head to decorate to your heart’s content. Slap some lips and moss on it, call it $9.75. I know how these things work. 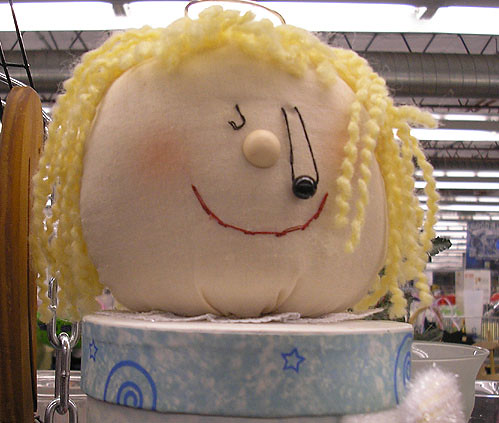 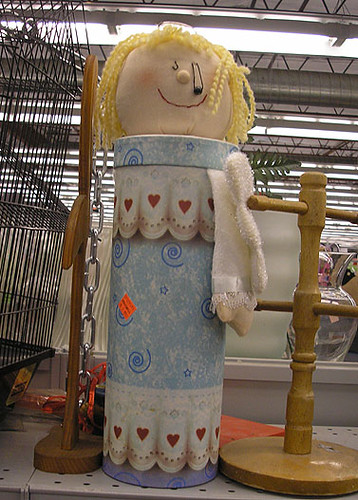 It would be awesome to be able to pack yourself up into your own body for easy storage, wouldn’t it? Just pop the top, tuck in the arms, wings, and so on. Maybe even the head would fit in there somehow, and suddenly you’ve gone from being an awkward flying thing with limbs everywhere to an angel that’s conveniently giftwrappable. Give the gift of angel!” It’s just a pity about that eye. God, you should do something about that eye. You’ll give the shepherds the fantods. 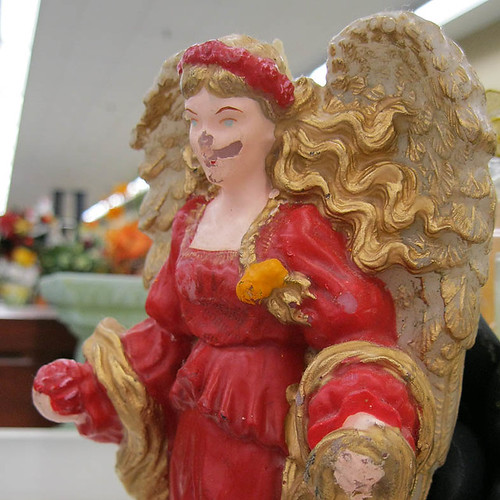 Hoboy…ah…Hardware Mesh Angel, “Merry Christmas” Country Craft Angle and Pierced Nipple Angel from Goodwill on 183 and Metric, and again, Goodwill at 183 and Metric, there’ll be a plate of cookies waiting for you tonight, just wear the Santa Claus suit. Tawdry glitter angel and red zombie angels, Savers on South Lamar near 290. Accordion Angel and small, clever-looking one-eyed angel from Salvation Army on 1325, bowling pin angel (?) from Goodwill on 2222, and Necktie Angel from San Antonio’s Texas Thrift, on South Flores.