You’d think that, if you used a flimsy little trinket your aunt bought at Hallmark to break open a brazil nut, at LEAST the thing should give you some sort of error message before the top of its head flies off. So…share a moment of silence for the fallen victims of brazil nuts. And then hand me a bowl, I love those things. 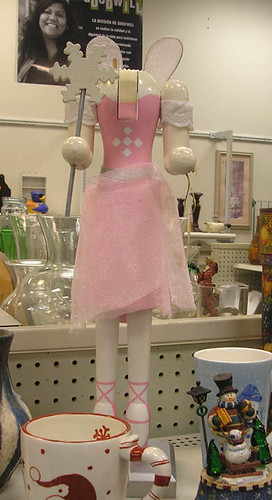 Yep, another filbert-based catastrophe. I mean, she clearly made the effort, and she had the chops for it, but never, never, take a nut that’s bigger than your head. Now, she adds an element of much-needed pathos to the stage production of Tchaikovsky’s “Dance of the Pink Winter Fairies.” Let the screaming and lurching begin.

Is this a nutcracker? I guess it isn’t, but it partakes of the spirit of the nutcracker, in that it’s vaguely military and the top of its head is basically elsewhere. 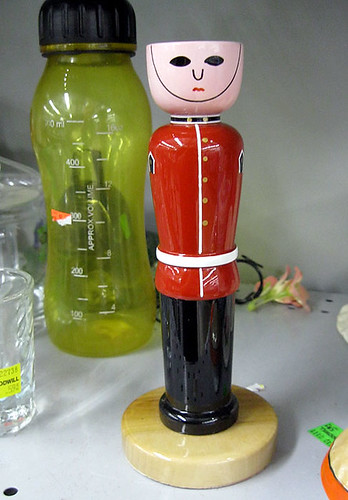 Hmm…I think I’ve totally misplaced this image, and it should really be in the “horrible candlesticks” post. Or maybe you put a nut on his head and hit it with a hammer, which sounds like a great way to get rid of some of those Christmas frustrations. It’s clear that the wars against the Mouse KingÂ aren’t going very well for Team Nutcracker. Not enough that the mice stole his arms (I hate it when that happens) but then they threw in a little impromptu brain surgery as well? Awful! The same thing happened to my great-uncle in the war. For years, he thought he was the silverware drawer. Awkward.

I kind of feel that dressing random household items up to look like a piece of Christmas Craft is really cheating somehow, the holiday folds onto itself like a MÃ¶bius strip and everything becomes self-referential. But that’s the draw of the season–to give the “let’s glue something onto something, paint it, and then give it to our loved ones because we clearly have too many loved ones” crowd something to do with their vast free time. In that generous spirit, we have the LEAST USEFUL Christmas Nutcracker of them all, bearing in mind that the Venn Diagram here has no overlap between the categories of “Christmas Nutcracker” and “good idea.” 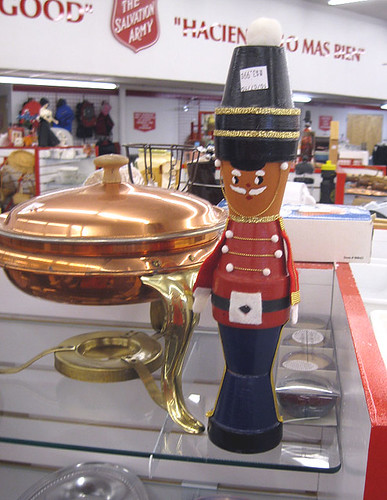 Someone’s grandmother made this. Again, we’re in the realm of “things that reference nutcrackers” again, my apologies for this inaccurately-titled post. His little “Lance Corporal in the Army of Twee” costume features a festive pom glued to his flower-pot hat, itself only the top of a poorly-conceived tower of flower pot tragedy. 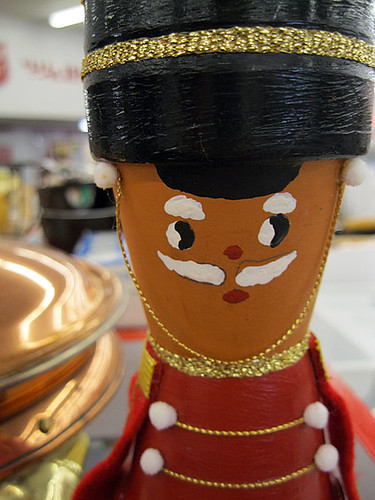 “You there! Villain! Unhand that string of Christmas lights and step away from the festive seasonal display, or I shall most assuredly topple on you!”

The floppy little minimal effort felt arms are my absolute favorite part of this. Another victim of the Mouse King wars, or maybe a refugee from the Muppets Christmas Special, doomed to flail madly when agitated. 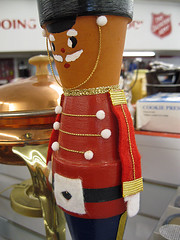 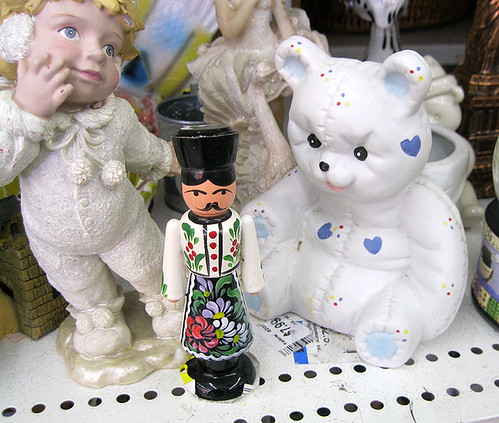 Theory number 147: the custom of the “Christmas Soldier” is to commemorate the legions of King Herod’s troops who were working on unpaid overtime to cap all the firstborn children in Israel. Those ancient soldiers suffered, too.

I’ve got to say, the little guy’s weathering this really well, very stoically. I would be substantially more nonplussed faced with a bear that size, even if he’d tattooed hearts on his nipples. In my limited experience, someone who tattoos hearts to their nipples is up to no good, and is only using their nipple-hearts as a clever ruse. The cherub looking on and smirking adds to the “tainted innocence” of the entire affair. S/he/it’s in on the game. 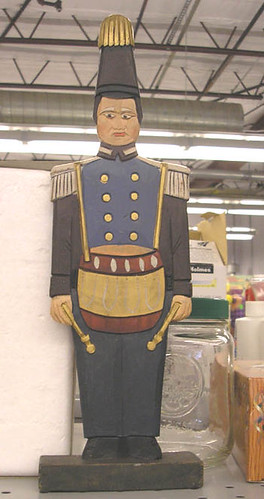 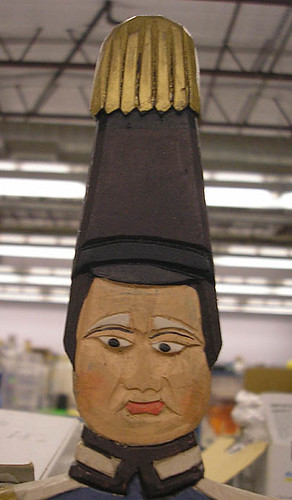 We are not a happy little drummer boy, and we ask you to take your Christmas Spirit and shove it up your parumpumpumpum. We are cold, we have been standing here for several hours, and we have better things to do, because we are missing our audition for the American Idol tryouts.

Pink Winter Fairy from Goodwill on 183 near 620, Nearly Headless Soldiar from Savers in North Austin, Pots Soldiar and Fear the Christmas Bear from Salvation Army near Metric and 183, and Holiday Wedge Warrior from the Goodwill on 2222, Austin.