One assumes that these are not a matched set, that is, not Humpty *and* Dumpty, but rather some sort of monstrous nursery-land cloning operation. “What all the King’s horses and all the King’s men could not join together, SCIENCE shall restore!” Maybe they’re some study in Newtonian physics–take two egg-like people, shove over identical walls, see which lands first and which lands with a bigger “splat.” 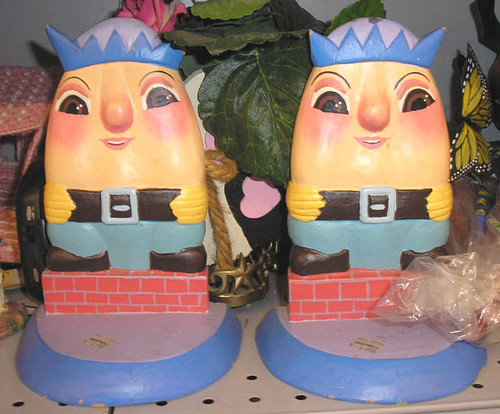 At least they’re happy about their lot in life. Ready to take the big plunge (though the one on the right’s got himself an airbag, let’s not leave everything to chance.) With any luck, it’ll be a short fall, not a great one, just a one-foot drop to a graceful face-plant.

Option 2: This is actually a weird office “team-building” excercise. Each employee stands in front of their co-worker–maybe their manager–who shoves them off a wall. The “heart” between the co-workers represents, I don’t know, probably synergy. After the bloody noses are staunched, they’re given stupid “Jughead”-esque hats, and their daily dose of soma. And then, another trip on the wall, because that soma’s pretty good stuff, and there’s always time for another trust-building exercise.

These are very…pink…egg people. Pink and healthy, like giant chins wedged into pants, or some particularly fey individual with large, flat blue shoes painted his shins in only the happiest of tones. Their inevitable tragedy is kind of a shame. But again, they’ve got a positive attitude about it, and really, that’s all that matters.