They ran out of lives :(

After this, it can only get better, kitten-wise.

In ancient Egypt, cats were mummified and entombed with the dead–with great pomp and circumstance, or just included in a shared crypt. Why? No-one knows. Or at least Wikipedia doesn’t know. Maybe it kept away mice. Maybe the beast that ate the judged souls was allergic to cat dander.

Why ramble about this? Why indeed? 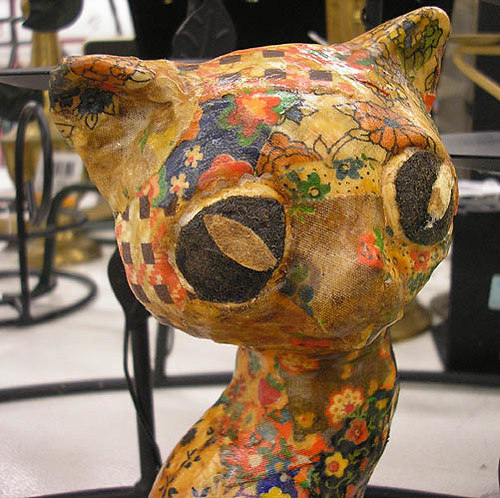 This poor little guy looks like he was embalmed by crazed quiltmakers in the 1960s, during the peak of the Margaret Keane art-clone wars–by a troupe of grandmothers after a quilting bee. “Oh, won’t your little kitten look cute when we’ve shellacked an entire remainders bin of gingham scraps to him? No? Add some more gingham, dear, you’ll come around once the acetate fumes build up a bit.”

It’s the muzzle that does it. It’s bony, attenuated, really adds a grim, deathlike cast to an otherwise delightfully camp-retro-schlock piece. 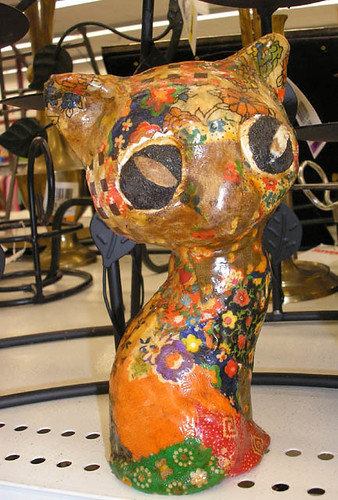 This way, Muffins will last well into the next millennium, where we will have finally figured out to resurrect beloved house pets–as long as their corporeal forms have been carefully preserved with decoupage. Until then, well, we’ll pick some really timeless patterns to keep her looking as fresh as possible. Bring me those pinking shears, I feel a fit of paisley coming on.

Not dead enough for you? Try Church here, I’m sure he’s sufficiently half-past dead. He’ll be appearing in a new cat zombie film shortly. It’s not very scary, you just run a can opener and they forget all about the brains. 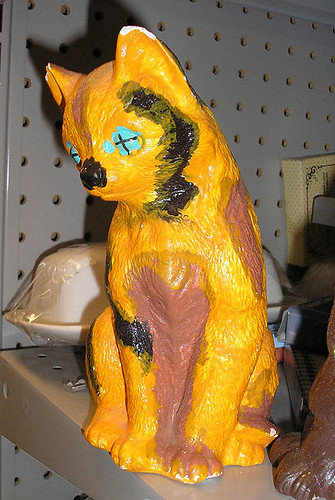 The jury…the jury is out here. Once again, we are in the realm of “high school rebellion against prefabricated art,” but there’s a certain love her, too–the cat looks far too well-realized. Was this someone’s art therapy after losing a favorite cat? Did their sister have a stuffed moggie with similar markings? 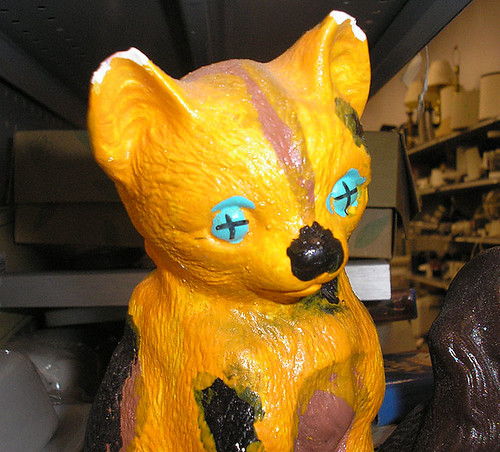